Rensselaer is a city located along the Iroquois River in Marion Township, Jasper County, Indiana, United States. The population was 5,859 at the 2010 census, up from 5,294 at the 2000 census. The city is the county seat of Jasper County. Saint Joseph's College is located just south of the city limits. 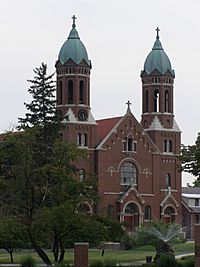 This settlement, first platted on June 12, 1839, was originally named Newton and was established at the rapids of the Iroquois River. By 1844, it had been renamed to Rensselaer after James Van Rensselaer, a merchant from Utica, New York, who came to the area after his business failed in the Panic of 1837. He took over the land from Joseph D. Yeoman, who had established a farm some years earlier and had begun to plan the village.

St. Joseph Indian Normal School was established in 1888 by St. Katherine Drexel, an heiress from Philadelphia, who donated $50,000 for the education of Catholic American Indian boys. The school trained 60 Indian Boys annually until 1896. The school was operated by the Bureau of Catholic Indian Missions.

Humid continental climate is a climatic region typified by large seasonal temperature differences, with warm to hot (and often humid) summers and cold (sometimes severely cold) winters. Precipitation is relatively well distributed year-round in many areas with this climate, while others may see a marked reduction in wintry precipitation and even a wintertime drought. The Köppen Climate Classification subtype for this climate is "Dfa". (Hot Summer Continental Climate).

Rensselaer has a public library, a branch of the Jasper County Public Library.

Rensselaer is served by Amtrak's Cardinal, which runs three days per week, stopping at the Rensselaer Amtrak station.

All content from Kiddle encyclopedia articles (including the article images and facts) can be freely used under Attribution-ShareAlike license, unless stated otherwise. Cite this article:
Rensselaer, Indiana Facts for Kids. Kiddle Encyclopedia.