Fishers is a city located in Fall Creek and Delaware townships, Hamilton County, Indiana, United States, with a population of 76,794, according to the 2010 census. A suburb of Indianapolis, Fishers has grown rapidly in recent decades: about 350 people lived there in 1963, 2,000 in 1980, and only 7,200 as recently as 1990. In 2011, Fishers was named the number one city for families by The Learning Channel and was selected as a Green Community by the Indiana Association of Cities and Towns. The city was named the safest in the nation by CQ Press for 2011-2012 and 2012-2013. In 2010, Fishers was ranked eighth in the best places to live according to Money magazine, America's best affordable suburb by BusinessWeek, and the eleventh best place to move in the country by Forbes. Fishers was also ranked the 24th best place to live in America by Money magazine in 2005, 33rd in 2006, 10th in 2008, and 12th in 2012.

After the passage of a referendum on Fishers' status in 2012, Fishers transitioned from a town to a city on January 1, 2015. The first mayor of Fishers—Scott Fadness—along with the city's first clerk and city council were sworn in on December 21, 2014.

The William Conner House and West-Harris House are listed on the National Register of Historic Places.

In 1802 William Conner settled what is now present-day Fishers, Indiana. Conner built a log cabin and a trading post along the White River (Indiana). The land that Conner settled is now known as Conner Prairie and is one of the nation's most respected living history museums. 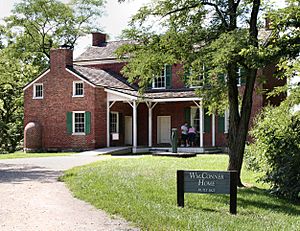 Settlers started moving to the area after Indiana became a state in 1816 and the Delaware Indians gave up their claims in Indiana and Ohio to the United States government in 1818 in the Treaty of St. Mary's. At the treaty William Conner served as an interpreter for Chief William Anderson, his father-in-law. At the time William Conner was married to Mekinges Conner princess and daughter of Chief William Anderson. In 1823, Hamilton County was chartered by the Indiana General Assembly and Delaware Township was established and surveyed. After the state of Indiana moved its capital to Indianapolis from Corydon in 1825, the community started to grow. After the move, John Finch established a horse-powered grinding mill, a blacksmith shop, and the area's first school. The next year the area’s first water mill was constructed.

During 1826 the Ambassador House was built near the White River, at the modern-day corner of 106th Street and Eller Road. It was later acquired by Addison and India Harris, who was appointed ambassador to the Austro-Hungarian Empire by U.S. President William McKinley. Today, Ambassador House sits on the grounds of Fishers' Heritage Park at White River, and plans for its restoration are being developed by Fishers' Historic Preservation Committee.

In 1908 the post office changed the name of Fishers Switch to Fishers by dropping "Switch."

After William Conner’s death in 1855, his family farm became a place of interest. The Hamilton County Historical Society placed a marker on the site of the William Conner farm in 1927. Eli Lilly, then head of Eli Lilly and Company, purchased William Conner's farm in 1934 and began restoring the farm. In 1964, Lilly asked Earlham College to oversee the Conner farm, now known as Conner Prairie.

In 1943, the Indianapolis Water Company constructed Geist Reservoir in order to prevent a deficit in Indianapolis's water supply. They believed that Fall Creek (Indiana) and the White River (Indiana) would not keep up with the demand for water in Indianapolis. In the 1970s, the company wanted to triple the size of the lake, but the plan was rejected in 1978 and homes began to spring up around the reservoir.

The Fishers population grew slowly to 388 by the 1960 census when rail shipment declined. Per township referendums in 1961, the town provided planning services for Delaware and Fall Creek Townships and approved residential zoning for most of the undeveloped area in the two townships.

The relocation of State Road 37 to the east side of town and the connection with Interstate 69 ensured the future growth of Fishers as a commercial and residential center. The Town of Fishers would soon become a fast-growing suburb of Indianapolis. Fall Creek Township became the site of a consolidation of area schools when Hamilton Southeastern High School was formed in the 1960s. In 1989 the town’s population reached 7,000 and the first Freedom Festival was held. Every year since the town has held a freedom festival.

The Thomas A. Weaver Municipal Complex opened as Fishers' civic and government center in 1992. The complex is home to the Fishers Town Hall, the police and fire department headquarters buildings, the Fishers Post Office, the Hamilton County Convention and Visitor's Bureau, and the Fishers Chamber of Commerce. Eventually, a library and an office of the Indiana Bureau of Motor Vehicles were added. This is still the center of government in Fishers.

The 2000 census reported the population of Fishers at almost 38,000. With the town’s affordable homes, growing economy, and proximity to the booming city of Indianapolis and Interstate 69 the growth in Fishers was tremendous. In 2003 the town of Fishers requested a special census from the U.S. Census Bureau to accurately measure the rapid population growth since 2000. This census would put the town's population at 52,390, which is a 38 percent increase from the 2000 census. Since then much of the government's resources have been devoted to building parks, maintaining roads, and managing the rapid growth of the town.

In 2005, after a controversy over alleged mismanagement, Conner Prairie formally split from Earlham College, becoming an independent corporation.

In July 2005, Money Magazine unveiled its annual ranking of Best Places to Live in the United States and rated Fishers as twenty-fourth best. Fishers ranked higher than any town or city in Indiana, and was one of only two jurisdictions in the state to crack the magazine's Top 100. Since then Fishers has won numerous awards including Best Affordable Suburb by BusinessWeek Magazine (2007), Best Place in the Country to Raise a Family by Forbes Magazine (2008, 2012), and Best Place to Raise Kids by BusinessWeek.com (2010).

In January 2009, the Geist United Opposition conceded a four-year legal battle with Fishers over the involuntary annexation of the contiguous, unincorporated area around Geist Reservoir. This allowed Fishers to annex and incorporate this area of 2,200 homes on January 2, 2010, and to begin taxing it in 2011. This increased Fishers population by about 5,500 people, making the town the eighth-largest community in Indiana.

In 2012, Fishers constructed a multipurpose trail in the downtown district and an amphitheater in the Thomas A. Weaver Municipal Complex. That November, the town announced the details of a major development project in the heart of downtown. The $33 million pedestrian oriented, mixed-use development on the north side of 116th Street, just west of Municipal Drive, broke ground in mid-2013 and is scheduled to be completed in 2015.

There were 27,218 households of which 48.1% had children under the age of 18 living with them, 64.1% were married couples living together, 7.9% had a female householder with no husband present, 3.0% had a male householder with no wife present, and 25.0% were non-families. 19.8% of all households were made up of individuals and 3.8% had someone living alone who was 65 years of age or older. The average household size was 2.82 and the average family size was 3.31.

Fishers has a humid continental climate (Köppen climate classification). Summers in Fishers are hot and humid with temperatures regularly in the 80s °F. Autumns and springs in Fishers have very comfortable temperatures normally around 70 °F, but springs have much less predictable weather and drastic temperature changes are common. Winters are cold and filled with snow and ice storms. During winter, temperatures are normally around 35 °F and often dip below 20 °F at night.

The Town of Fishers is located along Interstate 69. The town currently has four exits off the interstate. Fishers is 15 miles northeast of downtown Indianapolis and five miles from the Interstate 465 loop which connects Interstate 69 with Interstate 65, which runs northwest to Chicago and southward to Louisville; Interstate 70, running east to Columbus and west to St. Louis; and Interstate 74 running northwest towards Danville, and southeast towards Cincinnati. State Road 37 runs directly through Fishers, connecting Fishers with several other Indiana cities and towns.

Fishers has a general aviation airport, the Indianapolis Metropolitan Airport (KUMP), and the city is located roughly thirty minutes from Indianapolis International Airport.

Fishers does not have direct service from IndyGo, the regional bus service. Fishers is also featured in the first phase of the Indianapolis mass transit plan, featuring a light rail system that will run from downtown Indianapolis through Fishers to Noblesville.

As a fast-growing town, the roads in Fishers are mostly new and well-maintained. 116th Street won the American Concrete Pavement Association Main Street Award in 2006. A number of the town's four-way stops are being replaced by roundabouts.

On April 10, 2012 the Town of Fishers announced a $20 million investment in the 2012 Drive Fishers initiative; an effort that will focus on areas in Fishers that have had a history of high-traffic volume, such as 96th Street and Allisonville Road, State Road 37, and Fall Creek Road in Geist.

One attraction in Fishers is Geist Reservoir, offering activities like fishing and waterskiing. The reservoir is located minutes away from the Hamilton Town Center shopping complex and the downtown area of Fishers. There are many golf courses around Fishers. Fishers was named the second Best Under-rated Golf Community in U.S. by Livability in 2010. Fishers is home to Symphony on the Prairie, a summer concert series that takes place at Conner Prairie, presented by the Indianapolis Symphony Orchestra. The Town also offers a free summer concert series behind the Fishers Government Center, in the refurbished Nickel Plate District where an amphitheater was built in 2012. Fishers Music Works, an umbrella organization for smaller music performance ensembles, was created in spring 2013, offering a wide range of free and ticketed concerts, performed by Fishers residents and very local talent. The Parks and Recreation Department host outdoor movie nights at the Amphitheater as well as holiday events. Fishers is located near the Klipsch Music Center, which hosts concerts.

The Fishers Freedom Festival (FFF) takes place every year at the end of June, right before Independence Day. The 2008 festival was the 20th annual freedom celebration. A few annual traditions of the festival are a parade, a 5k run/walk named the Freedom Run, and a fireworks show on the last night of the festival. There are art and food vendors and game booths. The FFF is located at Roy G. Holland Memorial Park.

The Fishers Renaissance Faire, presented by the Sister Cities Association of Fishers Indiana, has been held annually since 2005. It is held the first week end in October on the grounds of the Saxony development. Its purpose is to celebrate the Sister City relationship of Fishers with Billericay, England. The Faire features jousting, pirate shows, magicians, jesters, minstrels, a queen-complete with her royal court, a period village, authentic period/parody staged entertainment, period art and craft vendors, a wide variety of food and beverages as well as scripted interactions amongst the cast of 150 authentic, legendary, and historic characters throughout the entire fair. Children's activities are provided by the Fishers Kiwanis and Key Clubs.

The Town of Fishers is home to over a dozen parks and nature preserves. The Fishers Trail & Greenway System has more than 85 miles available for use.

The Town of Fishers has earned many awards; below are some of the numerous awards and accolades the town has received.

. Billericay Park is named after the sister city.

All content from Kiddle encyclopedia articles (including the article images and facts) can be freely used under Attribution-ShareAlike license, unless stated otherwise. Cite this article:
Fishers, Indiana Facts for Kids. Kiddle Encyclopedia.