Billericay ( BIL-ə-RIK-ee) is a town and civil parish in the Borough of Basildon, Essex, England. It lies within the London Basin and constitutes a commuter town 28 miles (45 km) east of central London. The town has three secondary schools and a variety of open spaces. It is thought to have been occupied since the Bronze Age.

Some of the earliest records of human occupation of Billericay are the burial mounds in Norsey Wood: evidence of occupation in the Bronze and Iron Ages. Evidence of Roman occupation has been found at a number of locations in the town and there may have been a small cavalry fort at Blunts Wall.

Billericay (previously Billerica) is a well-known exception in the identification of the origins of English place-names. The name of the town was first recorded as "Byllyrica" in 1291. The urban settlement, which was within the manor and parish of Great Burstead, was one of many founded in the late 13th century in an already densely populated rural landscape. Several suggestions for the origin of the place name include:

Although the a precise etymology of the name is not known, England has other places named Billericas, they are:

The Tudor antiquarian John Leland believed the already-abandoned Billerica in Kent was a variant of Bellocastrum, ‘fair castle’ in Latin. In Billericay there is a Roman fort at Blunt’s Wall Farm; likewise ‘Burh’ gives is name to Great Burstead. This suggests that a Romano-British place name was reused by the Anglo-Saxons following the end of Roman rule in Britain. 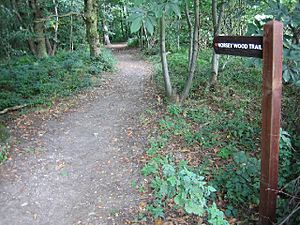 In the 13th and 14th centuries some pilgrims to Canterbury journeyed via Billericay. Some of them may have spent the night in Billericay before crossing the River Thames at Tilbury. This may account for the large number of inns in the town.

Billericay's most notable historical episode was the Battle of Billericay during the Peasants' Revolt of 1381.

The Wycliffe preachers influenced the town. Four local people (Thomas Watts, Joan Hornes, Elizabeth Thackwell, and Margaret Ellis) were burnt at the stake. Two other residents (Joan Potter and James Harris) were tortured for their faith during the reign of Queen Mary.

A meeting of the Pilgrim Fathers prior to their sailing in the Mayflower is said to have taken place in Billericay, and many local names and much historical imagery reflect this: Mayflower House, Morris Men, Taxis, School, Hall. Sunnymede School's houses were called Mayflower, Pilgrim, Chantry and Martin (after Christopher Martin, a Billericay merchant who travelled on the Mayflower as Ship's Governor).

Four people from Billericay were on board, including Christopher Martin. He and his wife Marie, along with Solomon Prowe and John Langemore, perished shortly after their arrival at Cape Cod, Massachusetts.

The unfortunate fate of the would-be pioneers did not deter other inhabitants of Billericay from setting sail for the New World. The town of Billerica, Massachusetts was established in 1655 by colonists from Billericay and named after their home town in England.

In the Georgian period many excellent examples of the period's houses were built in Billericay. One of those remaining today is Burghstead Lodge in High Street, which used to house the library. The road from Billericay to Tilbury still had a reputation for "footpads" and highwaymen operating along the road, where it passed through open country.

In the town, the Union Workhouse was built in 1840 to continue to implement the Poor Law. Parts of this building were later incorporated into what was St. Andrew's Hospital. The railway arrived in Billericay in 1889, being on the Great Eastern Main Line between London and Southend-on-Sea.

In 1916, during the First World War, one of the giant German Zeppelin airships was shot down during an aerial battle over Billericay. During its fiery demise, it narrowly missed the High Street, crashing into a field off of Greens Farm Lane. A plaque was erected at the site in 2016, to commemorate 100 years since the crash. Parts of the aluminium frame can be seen at the Cater Museum in Billericay High Street Recent research has indicated that this may be identified with the 'ghost Zeppelin' of Tonbridge which was allegedly seen floating over that town earlier in the day.

St. Andrew's Hospital, which was formerly the site of the town's Victorian workhouse, continued to function as an important communal building. From 1973, it housed the internationally renowned Regional Plastic Surgery and Burns unit until this was relocated to Broomfield Hospital, Chelmsford in April 1998. After the relocation, most of the hospital was redeveloped into housing. The listed buildings remain intact but are now residential. 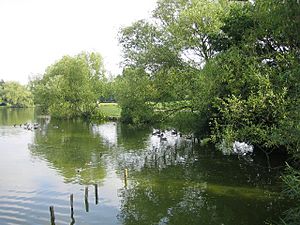 The Boating Lake at Lake Meadows

Billericay is a part of the London commuter belt.

It is served by Billericay railway station on the Abellio Greater Anglia route from Liverpool Street station, in the City of London, to Southend. The station connects to local bus routes.

Billericay is close to two primary routes: the A12 to the north and the A127 in the south. The A176 provides a road link to Basildon to the south of Billericay, as well as to the A127. The only secondary road in the town, the B1007, passes from just south of the town centre as Laindon Road, meets the A129 at Sun Corner and then continues northwards as Billericay's High Street and then Stock Road. It continues north to the county town of Chelmsford. Along its route is the village of Stock and an interchange to the A12. The town is a destination on the A129, linking it to the neighbouring towns of Brentwood and Wickford.

Billericay is served by a community radio station, Phoenix FM, which is based in Brentwood.

The town was immortalised in the Ian Dury and the Blockheads song "Billericay Dickie". Billericay is mentioned in George Orwell's novel Down and Out in Paris and London. Billericay is the setting of the BBC sitcom Gavin & Stacey as the home of Gavin Shipman (Mathew Horne) and his parents; however, the actual filming took place in Wales.

The Cater Museum is a privately owned local history museum housed in an 18th & 19th century building in the High Street. The Billericay Community Archive strives to record photos, memories and history relating to the town and surrounding areas on their website.

The Mayflower Morris Men are members of the Morris Ring of England and continue to dance the Morris in the town and perform their traditional Mummers' play, St. George and the Dragon, in the High Street every year on the nearest Saturday to St. George's Day.

Billericay is twinned with:

All content from Kiddle encyclopedia articles (including the article images and facts) can be freely used under Attribution-ShareAlike license, unless stated otherwise. Cite this article:
Billericay Facts for Kids. Kiddle Encyclopedia.