Noblesville is a city in, and the county seat of, Hamilton County, Indiana, United States, located just north of Indianapolis. The population was 51,969 at the 2010 census making it the 14th largest city/town in the state, up from 19th in 2007. The city is part of Delaware, Fall Creek, Noblesville, and Wayne townships.

Noblesville is also home to the Klipsch Music Center, an outdoor music venue, and the Indiana Transportation Museum. 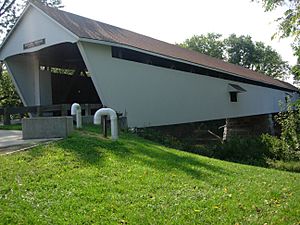 Noblesville's history dates back to 1818 when the land, which is now Hamilton County, was purchased by the government from the Native Americans in this area. William Conner, the only settler living in the area at the time, and his wife Mekinges Conner, a Lenape, established the first trading post in central Indiana in 1802 and lived in the first log cabin in the area. William Conner and Josiah Polk laid out what is now downtown Noblesville in 1823, which was designated as the Hamilton County seat in 1824 and incorporated in 1851. Conner's 1823 home is now one of a village of historic buildings making up Conner Prairie Pioneer Settlement, a living history museum south of Noblesville in Fishers.

Noblesville was named either for James Noble, one of the first two US senators from Indiana, or, according to legend, for Lavina Noble of Indianapolis, to whom Josiah Polk was engaged.

The Peru and Indianapolis Railroad was completed through town in 1851, strengthening the town economically and causing the population to increase. In 1875 work was begun on the town's second railroad, the Anderson, Lebanon and St. Louis, later known as the Midland.

The city's first large growth period came during the Indiana gas boom with the discovery, in 1888, of Noblesville's first natural gas well near 11th and Pleasant streets. Many Victorian homes, as well as the vast majority of the downtown commercial district, were built during this time of prosperity. The city has undergone another increase recently as its population grew from 28,590 in 2000 to 51,969 in 2010. This growth echos the increase in population of much of southern Hamilton County as a due to its proximity to Indianapolis.

Noblesville was once noted for its flour mills, the mostly widely known of which was the Noblesville Milling Company, producer of Diadem and Kismet flours. In 1925, the manager of the company offered to buy uniforms for the local high school athletic team in exchange for school adopting the nickname “Millers.” The nickname persists to this day.

Other prominent businesses of the past include the Union Sanitary Manufacturing Company, the American Strawboard Company and Firestone Industrial Products.

Among the notable disasters to have struck the town are the Great Flood of 1913, an interurban wreck on the courthouse square in 1919, and the Goeke fire of 1967. The fire, which began at the Paul Goeke auto dealership just off the square, destroyed two buildings and took the life of one firefighter.

The old Hamilton County Sheriff’s Residence and Jail on the southwest corner of the courthouse square in downtown Noblesville is now the home of the Hamilton County Museum of History, but as a working jail it once housed Charles Manson as a teenager and D. C. Stephenson, former Grand Dragon of the Indiana Ku Klux Klan. The Stephenson trial, which took place in the adjoining Hamilton County courthouse in 1925, broke the power of the Klan in Indiana and drew national attention to Noblesville. Stephenson was convicted of second-degree murder in the death of Madge Oberholtzer.

During the early 1920s, Noblesville was one of several Indiana towns in which the Ku Klux Klan was active, but the Klan’s influence quickly faded in the wake of Stephenson’s conviction. In 1973 Klansmen staging a march in Noblesville were met by counter-demonstrators carrying anti-Klan placards.

In 1995, a local contractor stumbled across a trunk containing Klan paraphernalia and membership records from the 1920s era. The discovery sparked a debate over how to handle the sensitive issue and again put Noblesville in the national spotlight. The Hamilton County Historical Society, to which the materials had been donated, opted to not make it possible for the general public to see the names of those who had been local Klan members. 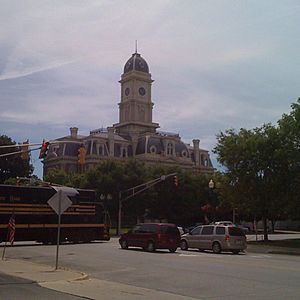 According to the 2000 U.S. Census the mean population of Ohio, Indiana, Michigan, Illinois, and Iowa can be found in Noblesville.

There were 19,080 households of which 42.9% had children under the age of 18 living with them, 58.3% were married couples living together, 10.8% had a female householder with no husband present, 4.2% had a male householder with no wife present, and 26.7% were non-families. 21.6% of all households were made up of individuals and 6% had someone living alone who was 65 years of age or older. The average household size was 2.69 and the average family size was 3.15.

All content from Kiddle encyclopedia articles (including the article images and facts) can be freely used under Attribution-ShareAlike license, unless stated otherwise. Cite this article:
Noblesville, Indiana Facts for Kids. Kiddle Encyclopedia.