Tipton is a city in and the county seat of Tipton County, Indiana, United States. The population was 5,106 at the 2010 census. It is part of the Kokomo, Indiana, Metropolitan Statistical Area. It was named after John Tipton, a politician.

The Tipton County Courthouse and Tipton County Jail and Sheriff's Home were added to the National Register of Historic Places in 1984.

The first white person to settle in the area now known as Tipton was Samuel King, who purchased land between 1835 and 1836. The land was still a part of Hamilton County. He resided in Rush County, but visited the area frequently. Strawtown, Indiana was the closet trading post. King decided to found a town on the land he purchased and he platted the town on April 16, 1839. The town was named Kingston. Despite efforts, King failed to sell any of the plots that he platted. A few Miami Indians resided in the area still.

In January, 1844, Tipton County was founded and a county seat needed to be created. The county seat was originally going to be located in the middle area of the county, however, Miami Indians resided on the land and they were unable to create a town there. The county commissioners put out a call for landowners to propose that the county seat be placed on their land. King offered to donate 100 acres of Kingston. On October 16, 1844, the commissioners accepted his offer.

The commissioners were in charge of also naming the new town. Commissioner John D. Smith, who used to reside in Ohio, proposed to name the town Canton, after Canton, Ohio. The commission accepted the name. After October, it was decided to plat Canton. The area had to be cleared of trees and plants, and John Criswell did the surveying for $2 a day. Sales of the plots began in November. As of March 1845, 34 lots had been sold.

In 1845, a post office was going to be established in Canton. However, this did not proceed because it was discovered that there was a town already named Canton in the state, which was founded in 1838. The town was renamed Tipton, after John Tipton, a veteran of the Battle of Tippecanoe and the War of 1812. He was also the leader of the Indiana Rangers. Tipton served as United States Senator for Indiana from 1831 until shortly before his death in 1839. Finally, a post office was founded and John S. Ressler became the first postmaster.

Early Tipton was a mess, with log cabins and poorly built homes riddling the streets and not following the platting. Cows wandered through town and wild game was chased by residents through the streets. It was very rural. There was no telegraph or steam train, so communication with areas outside of the area were rare during this time. Residents lived mainly on hunting. Agriculture was poorly developed. Tipton was also known for flooding and mud, with people having to frequently walk through flood waters and swamp-like areas to get from house to house during wet seasons. By 1850, the population doubled and a physician, Isaac Parker, had founded his practice in the city.

Around August 1, 1845, the city entered into a cholera epidemic. The majority of residents fled the city. Livestock began dying of starvation and dehydration due to being left in their pens due to their owners deaths or fleeing of the city. One resident, Mason Lyons, freed all the animals that were still alive, allowing them to wander into the forest to feed. Stores and businesses closed. There were three doctors in town, including Isaac Parker. Over 20 people died. The epidemic lasted approximately one month.

In 1854, the Tipton Presbyterian Church was founded in the city, after being dissolved in Normanda. A Christian church was founded in Tipton in 1855. Its congregation met at the Methodist Episcopal church until a church was built in 1870. The congregation built a new church, the West Street Christian church, that was completed in 1908. The court house burnt down in 1857. The Methodist church served as the court house for three years until the new courthouse was finished. In 1872, the Jefferson street canal was built, which helped to drain the surface areas of the town. The canal was nonexistent by 1914. The first Catholic church was built in Tipton in 1874. By 1880, Tipton was primarily low-income and had little to no economy. Saloons were the most profitable businesses. Starting in 1880, the town began to rebuild its reputation. An incentive was offered to whomever built the first brick building. The Methodist church outgrew its building and the new church was the first brick building, starting the trend for two story brick buildings in the town. Tipton was incorporated in 1884, becoming the "city" of Tipton. The first city election was held in 1884.

In 1888, the Sisters of St. Joseph arrived in Tipton to settle. A small church was built and they founded St. Joseph Academy, a parochial school. The school closed in 1977. A Baptist church was organized in Tipton in 1898, with a church being built in 1900.

As of 1849, the city was covered in trees, underbrush, logs, stumps and wild vines and weeds. A large swamp was located on the southeastern part of the town square. On the north side of the square was a slough. Wolves, bull frogs, deer, mosquitos, and wild game were commonplace.

The city library was founded in 1900 and built in 1901. It opened in Spring 1901 and over 500 books were donated to the library. In 1915, Andrew Carnegie donated $10,000 to the city with the agreement that city would contribute $1,000 towards library operations annually. The Carnegie Library began construction on October 15, 1902. The library does not stand today. An endowment was founded by a donor, Nannie R. Shirk, who named the endowment after her late husband, E.H. Shirk.

Every year, the weekend afterLabor Day the Tipton County Pork Festival takes place. The event features a parade, a queen contest where Miss Pork Cuisine is crowned, food and music.

In the early 20th century, 26 aces of land were set aside for a Tipton City Park, with streams and trees. The park was prone to flooding from Cicero Creek, however, during the summer, the park was popular for its honeysuckle plants.

Daniel Smith opened the first tavern in Tipton, then known as Canton, called the Canton House. A second tavern was opened in 1846 by Andrew J. Redmond, who would eventually become the town sheriff. John Cassler was the first merchant to locate his business in Tipton. On the east side of the town square, Cassler ran his business out of a log cabin. In 1845, he was granted the license to sell groceries and liquor. Starting in 1850, Newton J. Jackson began selling goods. He eventually became the first auditor for the county. Charles and Conde Bishop were the first carpenters in Tipton. A tanyard was founded by William and Elijah Hall in 1847. The business closed in 1882 due to innovations in tanning. Merchandise was delivered to Tipton via wagons and on horseback from Lafayette, Peru, and Indianapolis. By 1851, Tipton had blacksmiths, a cabinetmaker, a bakery, a saddlery, and a gunsmith. The Young Furniture Company was founded in 1850.

The Lake Erie & Western Shops were located in Tipton, which, as of 1914, employed 350-400 people. The Tipton Chamber of Commerce was founded on March 24, 1914. Canning was a popular industry in Tipton during the early 20th century. The industry was brought to Tipton by N.S. Martz. Tomato processing was common due to the high quality black loam in the area. The Fame Canning Company canned corn, peas and tomatoes. The Snider Preserve Company processed tomato pulp. The Oakes Manufacturing Company produced poultry incubators and related supplies for international distribution. There were two buggy factories in Tipton, too: the Binkley Buggy Company and the Charles Bros. Carriage Factory. The J.J. McIntosh broom factory was the largest in the state.

A hotel was founded in 1852 by Harrison A. Woodruff. As of 1914, the hotel had become the location of an Oddfellows hall. A second hotel, the Smith Hotel, was built in 1852, too, at the corner of Main and Jefferson. Two additional hotels were built in the town, the City Hotel, which is no longer standing, and a frame hotel built by John Long in 1865. The hotel was destroyed by a fire in 1873. A brick hotel was built on the same site, called the Commercial Hotel. In 1914, it was described as "a first-class hotel," with "all modern hotel conveniences."

The first school to open in Tipton was in the winter of 1846–7. School took place at a log cabin in what is now downtown Tipton. Students attended school two to three months out of the year. Teachers were poorly paid and often boarded with the families of the students they taught to make ends meet. A frame school house was built in 1852, which provided a permanent learning space for residents. The school was also used as a church at times, and as of 1914 a church had been built on the former school site.

The Sisters of St. Joseph came to Tipton in 1888 and founded a parochial school called St. Joseph's Academy. The school served high school students. It ceased operations in 1972.

Tipton Community School Corporation serves the city of Tipton, and the southern half of Tipton County, with an elementary school, middle school, and high school co-located on one campus on the south-side of town. District enrollment for the 2014–15 school year comprised 1,732 students. As of 2006, 93% of the school population was Caucasian.

Tipton Schools counts 1,851 students in K-12, with 97% being Caucasian, and the remaining 3% either African-American, Hispanic, Native American, Indian, or multiracial. St. John the Baptist School served grades K-5, and was a Roman Catholic school. This institution closed in 2014 due to low enrollment. 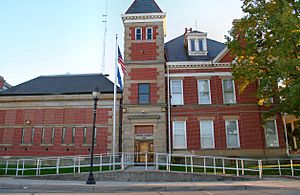 Tipton has a public library, a branch of the Tipton County Public Library.

In the mid to late 19th century, Tipton was known as being a very dirty and muddy place. Transportation was poor, with a poorly maintained railroad and "mud boats" being noted types of transportation. Mud boats were boat-like vehicles which were powered by oxen and transported people through the large amounts of mud in the area. Flooding was also common during this period.

In 1890, Tipton became the first city in the state to have brick paved streets. Representatives from Tipton traveled to Bloomington, Illinois to examine that city's brick streets and upon returning to Tipton they commissioned 2 1/2 blocks of brick paving on Jefferson Street. It was resurfaced with brick in 1914. Even in 1914, Tipton had more paved streets than any other city in the state.

Historically, Tipton had no formal railroad. Around 1850, a railroad was located in the area and was described by a visitor as being "the worst railroad bed I had ever seen." The train would stop anywhere on the line and pick up people, not needing a proper station. It sometimes did not stop, moving slowly enough that people could jump onto it.

The Tipton Light, Heat and Power Company was founded in 1888. Citizens' Gas Company as founded in 1892. Indiana Gas Light Company bought Citizens' in 1913. Natural gas was piped in from West Virginia to a depot in Elwood for distribution in Tipton. The Tipton Electric Light and Water Works was founded in 1898. The water supply station was built in 1894-5 for $3,500. As of 1914, Tipton had a sewer system with 12 miles of piping.

As of 1845, Tipton had no proper healthcare. Quinine and whiskey were used to help with miasma from the surrounding wetlands and country. By 1850, the first physician had founded his practice in Tipton, Isaac Parker. In 1854, the town suffered from a cholera epidemic.

All content from Kiddle encyclopedia articles (including the article images and facts) can be freely used under Attribution-ShareAlike license, unless stated otherwise. Cite this article:
Tipton, Indiana Facts for Kids. Kiddle Encyclopedia.