The Miami (Miami-Illinois: Myaamiaki) are a Native American nation originally speaking one of the Algonquian languages. Among the peoples known as the Great Lakes tribes, it occupied territory that is now identified as North-central Indiana, southwest Michigan, and western Ohio. By 1846, most of the Miami had been forcefully displaced to Indian Territory (now part of Oklahoma). The Miami Tribe of Oklahoma is the only federally recognized tribe of Miami Indians in the United States. The Miami Nation of Indiana is an unrecognized tribe.

The name Miami derives from Myaamia (plural Myaamiaki), the tribe's autonym (name for themselves) in their Algonquian language of Miami-Illinois. This appears to have been derived from an older term meaning "downstream people." Some scholars contended the Miami called themselves the Twightwee (also spelled Twatwa), supposedly an onomatopoeic reference to their sacred bird, the sandhill crane. Recent studies have shown that Twightwee derives from the Delaware language exonym for the Miamis, tuwéhtuwe, a name of unknown etymology. Some Miami have stated that this was only a name used by other tribes for the Miami, and not their autonym. They also called themselves Mihtohseeniaki (the people). The Miami continue to use this autonym today.

Early Miami people are considered to belong to the Fischer Tradition of Mississippian culture. Mississippian societies were characterized by maize-based agriculture, chiefdom-level social organization, extensive regional trade networks, hierarchical settlement patterns, and other factors. The historical Miami engaged in hunting, as did other Mississippian peoples.

During historic times, the Miami were known to have migrated south and eastwards from Wisconsin from the mid-17th century to the mid-18th century, by which time they had settled on the upper Wabash River in what is now northwestern Ohio. The migration was likely a result of their being invaded during the protracted Beaver Wars by the more powerful Iroquois, who traveled far in strong organized groups (war parties) from their territory in central and western New York for better hunting during the peak of the eastern beaver fur trader days. The Dutch and French traders and, after 1652, the British fueled demand. The warfare and social disruption contributed to the decimation of Native American populations, but the major factor were fatalities from infectious diseases for which they had no immunity. 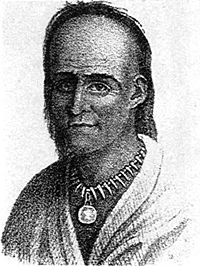 Lithograph of Little Turtle is reputedly based upon a lost portrait by Gilbert Stuart, destroyed when the British burned Washington, D.C. in 1814. 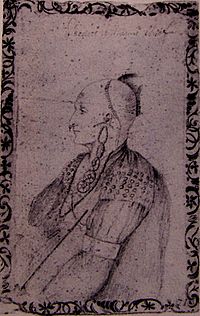 When French missionaries first encountered the Miami in the mid-17th century, the indigenous people were living around the western shores of Lake Michigan. The Miami had reportedly moved there because of pressure from the Iroquois further east. Early French explorers noticed many linguistic and cultural similarities between the Miami bands and the Illiniwek, a loose confederacy of Algonquian-speaking peoples. The term "Miami" has imprecise meaning to historians. In the 17th and 18th centuries, the term "Miami" generally referred to all of these bands as one grand tribe. Over the course of the 19th century, "Miami" came to specifically refer to the Atchakangoen (Crane) band.

At this time, the major bands of the Miami were:

In 1696, the Comte de Frontenac appointed Jean Baptiste Bissot, Sieur de Vincennes as commander of the French outposts in northeast Indiana and southwest Michigan. He befriended the Miami people, settling first at the St. Joseph River, and, in 1704, establishing a trading post and fort at Kekionga, present-day Fort Wayne, Indiana.

By the 18th century, the Miami had for the most part returned to their homeland in present-day Indiana and Ohio. The eventual victory of the British in the French and Indian War (Seven Years' War) led to an increased British presence in traditional Miami areas.

Shifting alliances and the gradual encroachment of European-American settlement led to some Miami bands merging. Native Americans created larger tribal confederacies led by Chief Little Turtle; their alliances were for waging war against Europeans and to fight advancing white settlement. By the end of the century, the tribal divisions were three: the Miami, Piankeshaw, and Wea.

The latter two groups were closely aligned with some of the Illini tribes. The US government later included them with the Illini for administrative purposes. The Eel River band maintained a somewhat separate status, which proved beneficial in the removals of the 19th century. The nation's traditional capital was Kekionga. 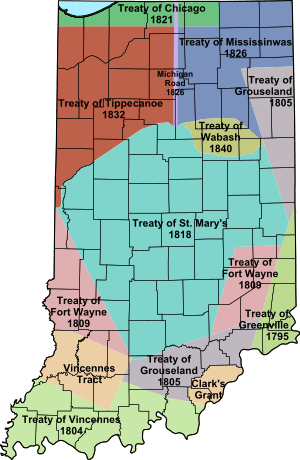 The Miami had mixed relations with the United States. Some villages of the Piankeshaw openly supported the American rebel colonists during the American Revolution, while the villages around Ouiatenon were openly hostile. The Miami of Kekionga remained allies of the British, but were not openly hostile to the United States (US) (except when attacked by Augustin de La Balme in 1780).

The U.S. government did not trust their neutrality, however. US forces attacked Kekionga several times during the Northwest Indian War shortly after the American Revolution. Each attack was repulsed, including the battle known as St. Clair's Defeat, recognized as the worst defeat of an American army by Native Americans in U.S. history. The Northwest Indian War ended with the Battle of Fallen Timbers and Treaty of Greenville. Those Miami who still resented the United States gathered around Ouiatenon and Prophetstown, where Shawnee Chief Tecumseh led a coalition of Native American nations. Territorial governor William Henry Harrison and his forces destroyed Prophetstown in 1811, then used the War of 1812 as pretext for attacks on Miami villages throughout the Indiana Territory.

The Treaty of Mississinewas, signed in 1826, forced the Miami to cede most of their land to the US government. It also allowed Miami lands to be held as private property by individuals, where the tribe had formerly held the land in common. At the time of Indian Removal in 1846, those Miami who held separate allotments of land were allowed to stay as citizens in Indiana. Those who affiliated with the tribe were moved to reservations west of the Mississippi River, first to Kansas, then to Indian Territory in Oklahoma.

The divide in the tribe exists to this day. The US government has recognized the Western Miami as the official tribal government since the forced divide in 1846. Migration between the tribes has made it difficult to track affiliations and power for bureaucrats and historians alike. Today the western tribe is federally recognized as the Miami Tribe of Oklahoma, with 3553 enrolled members.

The Eastern Miami (or Indiana Miami) has its own tribal government, but lacks federal recognition. Although they were recognized by the US in an 1854 treaty, that recognition was stripped in 1897. In 1980, the Indiana legislature recognized the Eastern Miami and voted to support federal recognition. In the late 20th century, US Senator Richard Lugar introduced a bill to recognize the Eastern Miami. He withdrew support due to constituent concerns over gambling rights. In recent decades, numerous federally recognized tribes in other states have established gambling casinos and related facilities on their sovereign lands. Such establishments have helped some tribes raise revenues to devote to economic development, health and education. On 26 July 1993, a federal judge ruled that the Eastern Miami were recognized by the US in the 1854 treaty, and that the federal government had no right to strip them of their status in 1897. However, he also ruled that the statute of limitations on appealing their status had expired. The Miami no longer had any right to sue. 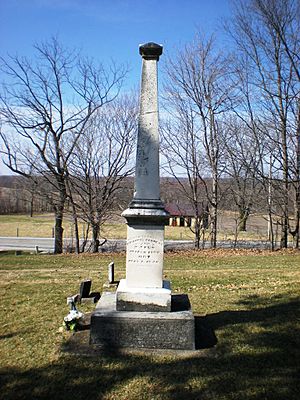 Places named for the Miami

All content from Kiddle encyclopedia articles (including the article images and facts) can be freely used under Attribution-ShareAlike license, unless stated otherwise. Cite this article:
Miami people Facts for Kids. Kiddle Encyclopedia.