Miamisburg ( MY-am-EEZ-burg) is a city in Montgomery County, Ohio, United States. The population was 20,181 at the 2010 census. A Suburb of Dayton. It is part of the Dayton Metropolitan Statistical Area. Miamisburg is known for its large industry (mainly for its nuclear operations during World War II) and retail factors (such as the Dayton Mall) commercial business area, which is partially located in Miami Township, and as the home to the Miamisburg Mound. Miamisburg borders Miami Township, Springboro, and West Carrollton. The sister city of Miamisburg is Owen Sound, Ontario, Canada.

European-Americans started calling their first community "Hole's Station" circa 1797, when Zechariah Hole settled there with his family from Virginia and built a stockade on the west bank of the Miami River opposite the mouth of Bear Creek. The stockade attracted squatters, surveying parties, and other settlers who had taken grants to live in the local cabins until they could build their own; hence the little community became known as "Hole's Station". Settlers came west primarily from Pennsylvania. By 1822, the unincorporated community had become a village; it achieved city status in the 1920s.

By 1827, the Miami and Erie Canal was under construction through the community, which improved transportation of people and goods through the region. The formal opening took place in January 1829, when the Governor Brown was the first packet boat to go through the settlement. Also that year the first boats from Cincinnati had arrived and passed through Miamisburg to get to Dayton. By 1834 the canal had been extended to Piqua, and many businesses along the river grew. The 1840s and the 1850s were brought the best of times to the canals.

George Kinder, a local resident, shipped bags of food to Ireland during its Great Famine; these also contained his address, with ads saying that he was hiring immigrant workers. Some Irish immigrants did come to Miamisburg and surrounding cities in search of work. By the early 20th century, however, the canal was abandoned. Later, highways carried most of the local traffic.

Miamisburg was the site of one of the first post-war U.S Atomic Energy Commission (AEC) facilities, beginning in 1947. The Dayton area had supported numerous secret operations for the War Department during World War II. As the war ended, the majority of these operations were moved to the Miamisburg Mound Laboratory, which was operated by the Monsanto Chemical Company. The Mound Labs were to monitor all aspects of the US nuclear defense stockpile.

The Mound Plant, built in 1947, was situated on a 306-acre (124 ha) site in the city 10 miles (16 km) south of Dayton. The workers, who numbered more than 2,000 at the height of the production, made plutonium detonators for nuclear weapons. Their work was very classified. The plant had a small army of security guards and was ringed by chain-link fencing and razor wire. When the Cold War ended, the plant discontinued the detonator work, but it continued to make nuclear power generators for space probes.

In May 1993 U.S Department of Energy decided to end all production at the Mound. This move affected 2,100 employees in the local area. By 1996 cleanup of radioactive and hazardous waste was the main activity at the Plant. The Mound Development Corporation spearheaded the creation of the Mound Advanced Technology Center in the redevelopment of the plant, with the Montgomery County Regional Dispatch Center joining 14 other tenants in March 2009. In December 2010, the Dayton Police Department became the 17th law enforcement agency, along with 11 fire departments, to be dispatched from the regional center.

On September 10, 1978, 15 cars of a Conrail freight train derailed as the result of a hot box, caused by uneven distribution of steel ingots in a gondola loaded at Buffalo, New York by Republic Steel. They demolished a house at the Pearl Street crossing and killed three of its five occupants. As a result of a cooperative investigation by the Miamisburg Police Department and the National Transportation Safety Board, the deaths were ruled homicides by the Montgomery County Coroner.

Eight years later, on July 8, 1986, another train derailed on the CSX Transportation line on the west bank of the river, igniting yellow phosphorus contained in a tanker car. 7,000 local residents were initially evacuated, but during clearing operations the next day another large escape of product resulted in re-ignition of the phosphorus. This led to the evacuation of approximately 30,000 people across southern Montgomery County, the largest evacuation in Ohio history. The resulting thick white cloud engulfed communities as far north as Yellow Springs, Pitchin, and South Vienna. Rolling in like a massive desert dust storm across the horizon, the chemical cloud hugged the ground and blotted out the sun for several minutes before dissipating. 569 persons were treated for "various complaints," more than $3.5 million in property damages occurred, and more than $1 billion in lawsuits resulted.

A nitric oxide distillation column at a local chemical plant known as Isotec exploded on September 21, 2003, causing school and other events to be cancelled. Isotec is a division of Sigma-Aldrich.

In the year 2018, a time vault is set to be opened to celebrate the city's 200th birthday. 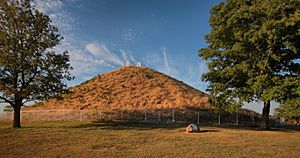 Miamisburg Mound, the largest conical mound in Ohio, is attributed to the Adena Culture, 1000-200 BCE.

Miamisburg is the location of a prehistoric Indian burial mound (tumulus), believed to have been built by the Adena Culture, about 1000 to 200 BCE. Once serving as an ancient burial site, the mound has become perhaps the most recognizable historic landmark in Miamisburg. It is the largest conical burial mound in Ohio,

View of Miamisburg under water, 1913.

The climate of Miamisburg and the surrounding region is dominated by a humid continental climate, characterized by hot, muggy summers and cold, dry winters. Miamisburg is prone to severe weather because of its location in the Midwestern section of the United States. Tornadoes are possible from spring to fall. Floods, blizzards, and severe thunderstorms can also occur.

Miamisburg has suffered some natural disasters. On June 9, 1869, a tornado struck the northwest part of town, reportedly destroying roofs and chimneys, as well as uprooting trees. It also destroyed Linden Avenue Bridge. Blizzards struck the town in 1978, 2004, and 2008.

In 1913, the Great Dayton Flood destroyed most of the city. Not much precipitation is needed to flood locations such as Rice Field, which is on the banks of the Great Miami River.

Due to the growth of the city in the 19th century, many of the older houses in the city are Victorian-style homes. They are concentrated in the neighborhood of "Old Miamisburg" (downtown and riverfront areas). Other architectural styles include Queen Anne, Italianate, and Second Empire-styled buildings. Much of Miami Township has residential housing of single-family homes, which were built during the expanded suburban development typical of the late 20th century, especially the 1970s through the 1990s. Newer houses have been built in the 21st century as some residents have sought higher-priced luxury homes, evidenced in new developments such as Pipestone, Crains Run, Heincke Woods, and Bear Creek.

To encourage and recognize Miamisburg citizens for maintaining the aesthetic appearance (tidiness, landscaping) of their property, the City Beautification Commission selects a number of "City Beautiful Awards" each July, August, and September for both residential and commercial properties. Additionally, the City Beautification Commission also offers awards for high-quality architectural renovation projects and for a number of holiday decoration displays in December.

Miamisburg is part of the Greater Dayton Regional Transit Authority, which has many bus routes throughout the city. 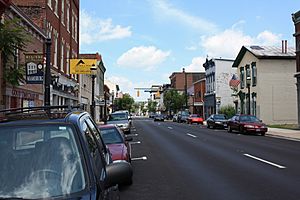 The city's downtown area is home to many small stores and historic buildings. Several restaurants are also located there including the original TJ Chumps, and other local and national chain restaurants. The Hamburger Wagon, a famous Miamisburg institution, is located on Market Square. Other historical buildings located downtown include the Baum Opera House, Gebhart Tavern, and Library Park.

Numerous community events are held during the year, such as live music and block parties. Every spring, 'Spring Break in the Burg' and the 'Spring Fling' festival is held downtown in Library Park. On Halloween, 'Boo in the Burg' offers special shopping and food specials for patrons. An annual bicycle race known as 'Tour D'Burg' is also held every summer in the downtown area.

Other annual events include:

Motoman, Verso Corporation and Dayton Superior are headquartered in Miamisburg.

According to Miamisburg's 2017 Comprehensive Annual Financial Report, the top employers in the city are:

Public education in Miamisburg is provided by the Miamisburg City School District. There are ten schools in the district, including seven elementary schools for grades Kindergarten through fifth grade, one primary school for the district's preschool program, one middle school for grades 6, and one high school. The year each building opened is listed in parentheses after the name of the school:

Miamisburg is ranked third in the Dayton Area for the best academic rate scores. Miamisburg has won the "Excellent District Award" in 2002, 2003, 2004, 2005, 2006, 2007, 2008, 2010, and 2011. For 2012, the district has been awarded the coveted "Excellent with Distinction" status. Miamisburg High School was recognized as a National Blue Ribbon School of Excellence in 1997. Both Wantz Middle School and Kinder Elementary were awarded Blue Ribbon Awards in the early 21st century.

After three failed attempts, voters passed a US$78.5 million bond issue on March 4, 2008. The bond issued raised $23 million for a large-scale addition and renovation project at Miamisburg High School and $31 million for the construction of Miamisburg Middle School, grades 6–8, which opened in August 2011. In addition, the bond issue included $11 million for Jane Chance Elementary School, the district's seventh K-5 facility, which opened in August 2010. Also included was $11 million for an addition/renovation project at historic Kinder Elementary School and $4 million in various improvements to Bauer, Bear, Mark Twain, and Mound elementary schools, including renovated administration spaces, enhanced security and safety features, as well as an upcoming project at Mound Elementary School for a new playground, student drop-off area, and redesigned parking lots.

In addition to the public school district in Miamisburg, the city is also the home to the West Campus of Bishop Leibold School, a private catholic school named after Paul Francis Leibold. The West Campus of Bishop Leibold School deals with preschool through the third grade, while its East Campus in Miami Township deals with the fourth grade through the eight grade. Bishop Leibold School was awarded the National Blue Ribbon Award in 2008. Bishop Leibold has also been working to improve its STEM education and as a result has been awarded along with its teachers the Governor's Thomas Edison Award for Excellence in STEM Education four school years in a row (2010-2014). In its most recent school year for receiving the award (2013-2014) it was the only Dayton-area grade school to be recognized.

Miamisburg has a public library, a branch of the Dayton Metro Library.

All content from Kiddle encyclopedia articles (including the article images and facts) can be freely used under Attribution-ShareAlike license, unless stated otherwise. Cite this article:
Miamisburg, Ohio Facts for Kids. Kiddle Encyclopedia.