Germantown is a city in Montgomery County, Ohio, United States. The population was 5,547 at the 2010 census. A part of the Dayton metropolitan area, Germantown was founded by German Americans from Pennsylvania and was once home to a cigar industry.

Germantown is situated within German Township, in the south-western part of Montgomery County, Ohio. The town is in an area known as the Twin Valley, due to the Little Twin Creek on its east side, and Big Twin on its west and south sides, being in the forks of these streams.

According to the United States Census Bureau, the village has a total area of 4.26 square miles (11.03 km2), all land. 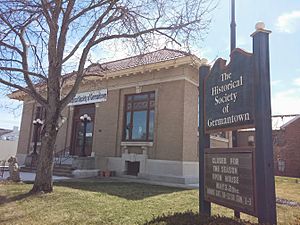 Germantown, was established in 1804 by German-speaking settlers from Berks County, Pennsylvania. Philip Gunckel, the only member of the group who spoke English, is recognized as Germantown's founder, who chose the site for a grist mill and laid out the original town plan in 1814. The Gunckel Town Plan, maintaining many of its original 19th and early 20th century buildings, has been recognized as a Historic District and has been placed on the National Register of Historic Places. 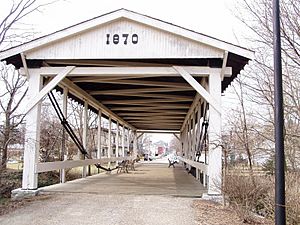 Germantown underwent many economic changes as distilleries, and the cigar industry, both came and went. In 1847 the Mudlick Distillery was established and, with an output of 30 barrels of whiskey a day, was considered the largest in the country for many years. At one time the Municipality housed up to 12 cigar warehouses and five factories, with the tobacco industry employing many residents up until the 1970s.

There were 2,142 households, of which 38.1% had children under the age of 18 living with them, 55.5% were married couples living together, 13.0% had a female householder with no husband present, 5.5% had a male householder with no wife present, and 26.1% were non-families. 22.6% of all households were made up of individuals, and 9.4% had someone living alone who was 65 years of age or older. The average household size was 2.57 and the average family size was 3.00.

Germantown is known for its historic downtown area and the unique wagon-wheel design of its alley system, which was originally laid out by Philip Gunckel when he settled in Germantown. The system is roughly bounded by Mulberry and Walnut Streets, and Warren and Market Streets. The downtown area was added to the National Historic Register in 1976.

Opened in Germantown in 1926, the By-Jo is an active historic theater that is located at 20 North Main Street and open Friday, Saturday, and Sunday for new movie releases.

All content from Kiddle encyclopedia articles (including the article images and facts) can be freely used under Attribution-ShareAlike license, unless stated otherwise. Cite this article:
Germantown, Ohio Facts for Kids. Kiddle Encyclopedia.