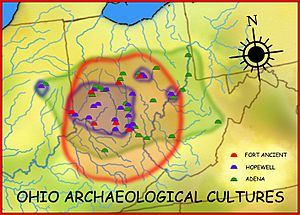 The Adena culture was a Pre-Columbian Native American culture that existed from 1000 to 200 BC, in a time known as the Early Woodland period. The Adena culture refers to what were probably a number of related Native American societies sharing a burial complex and ceremonial system. The Adena lived in an area including parts of present-day Ohio, Indiana, Wisconsin, West Virginia, Kentucky, New York, Pennsylvania and Maryland.

The Adena Culture was named for the large mound on Thomas Worthington's early 19th-century estate located near Chillicothe, Ohio, which he named "Adena",

Adena sites are concentrated in a relatively small area - maybe 200 sites in the central Ohio Valley, with perhaps another 200 scattered throughout Wisconsin, Indiana, Kentucky, West Virginia, Pennsylvania, and Maryland, although those in Ohio may once have numbered in the thousands. The importance of the Adena complex comes from its considerable influence on other contemporary and succeeding cultures. The Adena culture is seen as the precursor to the traditions of the Hopewell culture, which are sometimes thought as an elaboration, or zenith, of Adena traditions.

The Adena were notable for their agricultural practices, pottery, artistic works, and extensive trading network, which supplied them with a variety of raw materials, ranging from copper from the Great Lakes to shells from the Gulf Coast.

Lasting traces of Adena culture are still seen in the remains of their substantial earthworks. At one point, larger Adena mounds numbered in the hundreds, but only a small number of the remains of the larger Adena earthen monuments still survive today. These mounds generally ranged in size from 20 feet (6.1 m) to 300 feet (91 m) in diameter and served as burial structures, ceremonial sites, historical markers, and possibly gathering places. These earthen monuments were built using hundreds of thousands of baskets full of specially selected and graded earth. According to archaeological investigations, Adena earthworks were often built as part of their burial rituals, in which the earth of the earthwork was piled immediately atop a burned mortuary building. These mortuary buildings were intended to keep and maintain the dead until their final burial was performed. Before the construction of the earthworks, some utilitarian and grave goods would be placed on the floor of the structure, which was burned with the goods and honored dead within. The earthwork would then be constructed, and often a new mortuary structure would be placed atop the new earthwork. After a series of repetitions, mortuary/earthwork/mortuary/earthwork, a quite prominent earthwork would remain. In the later Adena period, circular ridges of unknown function were sometimes constructed around the burial earthworks.

The Adena also carved small stone tablets, usually 4 or 5 inches by 3 or 4 inches by .5 inches thick. On one or both flat sides were gracefully composed stylized zoomorphs or curvilinear geometric designs in deep relief. Paint has been found on some Adena tablets, leading archaeologists to propose that these stone tablets were probably used to stamp designs on cloth or animal hides, or onto their own bodies. It is possible that they were used to outline designs for tattooing.

Unlike in other cultures, Adena pottery was not buried with the dead or the remains of the cremated, as were other artifacts. Usually Adena pottery was tempered with grit or crushed limestone and was very thick; its decoration was largely plain, cord-marked or fabric marked, although one type bore a nested-diamond design incised into its surface. The vessel shapes were sub-conoidal or flat-bottomed jars, sometimes with small foot-like supports.

The large and elaborate mound sites served a nearby scattering of people. The population was dispersed in small settlements of one to two structures. A typical house was built in a circle form from 15 to 45 feet in diameter. The walls were made of paired posts tilted outward, that were then joined to other pieces of wood to form a cone shaped roof. The roof was then covered with bark and the walls may have been bark and/or wickerwork.

Their sustenance was acquired through foraging and the cultivation of native plants.

The Adena ground stone tools and axes. Somewhat rougher slab-like stones with chipped edges were probably used as hoes. Bone and antler were used in small tools, but even more prominently in ornamental objects such as beads, combs, and worked animal-jaw gorgets or paraphernalia. Spoons, beads and other implements were made from the marine conch. A few copper axes have been found, but otherwise the metal was hammered into ornamental forms, such as bracelets, rings, beads, and reel-shaped pendants.

All content from Kiddle encyclopedia articles (including the article images and facts) can be freely used under Attribution-ShareAlike license, unless stated otherwise. Cite this article:
Adena culture Facts for Kids. Kiddle Encyclopedia.