Chillicothe ( CHIL-i-KOTH-ee) is a city in and the county seat of Ross County, Ohio, United States. Located along the Scioto River 45 miles (72 km) south of Columbus, Chillicothe was the first and third capital of Ohio. It is the only city in Ross County and is the center of the Chillicothe, OH Micropolitan Statistical Area. The population was 21,901 at the 2010 census. Chillicothe is a designated Tree City USA by the National Arbor Day Foundation. 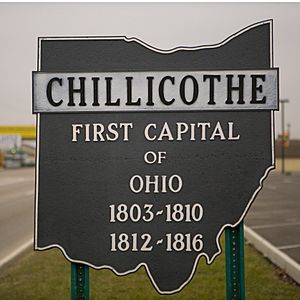 Chillicothe was the first and third capital of Ohio and is located in southern Ohio along the Scioto River.

The town's name comes from the Shawnee Chala·ka·tha, named after one of the five major divisions of the Shawnee people, as it was the chief settlement of that tribal division. The Shawnee and their ancestors inhabited the territory for thousands of years prior to European contact. At the time of European-American settlement, the community was plotted by General Nathaniel Massie on his land grant.

Modern Chillicothe was the center of the ancient Hopewell tradition, which flourished from 200 BC until 500 AD. This Amerindian culture had trade routes extending to the Rocky Mountains. They built earthen mounds for ceremonial and burial purposes throughout the Scioto and Ohio River valleys. Later Native Americans who inhabited the area through the time of European contact included Shawnees. Present-day Chillicothe is the most recent of seven locations in Ohio that bore the name, because it was applied to the main town wherever the Chalakatha settled.

Other population centers named Chillicothe in Ohio at one time include: one located at present-day Piqua, in Miami County; one located south of present-day Circleville, Pickaway County, on the Scioto River; a third about three miles north of Xenia in Greene County, Ohio; a fourth at present-day Frankfort, Ross County, on Paint Creek; and a fifth also located in Ross County, at Hopetown, three miles north of modern Chillicothe.

According to historian Charles Augustus Hanna, a Shawnee village was founded at the site of modern-day Chillicothe in late 1758, following the destruction of Lower Shawneetown by floods.

It was after the American Revolution that most European settlement came to this area. Migrants from Virginia and Kentucky moved west along the Ohio River in search of land. Chillicothe served as the capital of Ohio from the beginning of statehood in 1803 until 1810 when Zanesville became the capital for two years. The capital was moved to Zanesville as part of a state legislative compromise to get a bill passed. In 1812 the legislature moved the capital back to Chillicothe. In 1816 the state legislature voted to move the capital again, to Columbus to have it near the geographic center of the state, where it would be more accessible to most citizens. 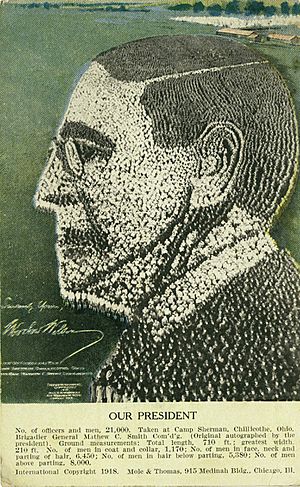 Migrants to Chillicothe included free blacks, who came to a place with fewer restrictions than in the slave states. They created a vibrant community and aided runaway slaves coming north. As tensions increased prior to the breakout of the American Civil War, the free black community at Chillicothe maintained stations and aid to support refugees on the Underground Railroad. Slaves escaping from the South traveled across the Ohio River to freedom, and then up the Scioto River to get more distance from their former homes and slave hunters. White abolitionists aided the Underground Railroad as well. 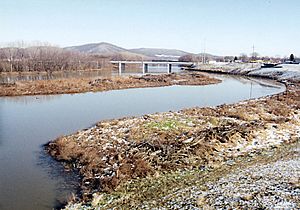 The Scioto River at Chillicothe in 2003

The city is surrounded by farming communities, and Chillicothe residents describe the area as the foothills of the Appalachians. 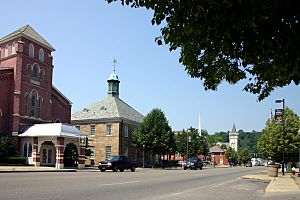 The south side of West Main Street. The squat, square building left of center is a replica of Ohio's first capitol building and serves as the office of the Chillicothe Gazette.

Chillicothe is home to the 158-year-old continuously operating Majestic Theatre. Its stage has been graced by such greats as Laurel and Hardy, Milton Berle, George Arliss, Sophie Tucker, and many others. In 1853 the Masonic Hall was built, as the first incarnation of what is now the Majestic Theatre. The two-story brick building was a combination lodge room, dance hall, and theatre. Stock companies stayed for as long as a month, performing a repertory of plays. In 1876 the Masons appointed a building committee to enlarge their building. The original building was 40 ft. x 100 ft. and was extended to 50 ft. x 120 ft. Upon completion in December 1876 it was announced that the Masonic Opera House was one of the finest theatres in the state. After the remodeling and with the completion of the Clough Opera House across the city, theatre offerings were tremendous, and varied drama, comedy, farce, minstrel shows and operas were presented.

In 1904 A. R. Wolf bought the Masonic Opera House. Mr. Wolf remodeled the theatre and enlarged the stage. He replaced all the windows in the front of the building with stained glass windows. The Masonic Opera House continued under Wolf's managerial abilities until he sold it to the Myers Brothers in 1915. They again made some improvements and repairs and installed a movie screen and equipment. The Myers Brothers changed the name to the Majestic Theatre. They occasionally had live theatre productions on the stage but finally switched exclusively to motion pictures. In July 1971, Harley and Evelyn Bennett became the new owners of the Majestic Theatre. They did careful restoration with reference to the original wall painting. Three Chillicothe businessmen bought the theatre as a non-profit organization in 1990. All new wiring throughout the theatre, fire safety, and security systems were installed. 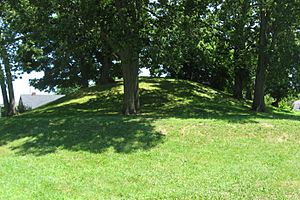 Chillicothe, rich in Native American history, hosts the annual Feast of the Flowering Moon Festival. Started in 1984, the May festival draws crowds of approximately 85,000. Yoctangee Park, in the historic downtown, is the setting for this family-oriented, three-day event featuring Native American music, dancing, traders and exhibits, a mountain men encampment, rendezvous with working craftsmen and demonstrations, and an extensive arts and crafts show with more than 80 crafters and commercial exhibits. The main stage has a schedule of family-friendly entertainment, such as local school bands and performers. The streets are lined with food booths and games/contests. Events are free to the public.

On the Friday and Saturday after Labor Day in September, Chillicothe hosts the annual Southern Ohio Storytelling Festival. The festival features concert performances by several highly acclaimed and award-winning storytellers. Storytelling concerts are held throughout the day on both Friday and Saturday. Thousands of students participate during the day on Friday in various venues, including the Majestic Theatre, a tent at the Pump House Art Gallery in Yoctangee Park, and local school auditoriums.

The Chillicothe Paints are a baseball team that was established in February 1993. The team was previously a member of the Frontier League. Now a member of the summer collegiate Prospect League, the Paints played in the independent Frontier League from the 1993 season until the end of the 2008 season. They were one of the original teams in the league. The Paints play their home games at V.A. Memorial Stadium, which opened in 1954.

In June, the streets of Chillicothe near Yoctangee Park are blocked off to accommodate temporary courts for the Gus Macker three-on-three basketball competition.

As the only city in the area, Chillicothe is a hub for economic activity. Malls, hospitals, prisons and a college campus are among the largest employers, but the most notable employer in the area is a Pixelle paper mill (formerly Glatfelter which was formerly Mead Paper) that has been in operation for over 100 years.

All content from Kiddle encyclopedia articles (including the article images and facts) can be freely used under Attribution-ShareAlike license, unless stated otherwise. Cite this article:
Chillicothe, Ohio Facts for Kids. Kiddle Encyclopedia.