Ross County is a county in the Appalachian region of the U.S. state of Ohio. As of the 2020 United States Census, the population was 77,093. Its county seat is Chillicothe, the first and third capital of Ohio. Established on August 20, 1798, the county is named for Federalist Senator James Ross of Pennsylvania. Ross County comprises the Chillicothe, OH Micropolitan Statistical Area, which is also included in the Columbus-Marion-Zanesville, OH Combined Statistical Area.

As of 1848, Ross County was described as having almost "one hundred enclosures of various sizes, and five hundred mounds" by Ephraim George Squier and Edwin Hamilton Davis in their book, Ancient Monuments of the Mississippi Valley. They describe the Indian-built earthworks as ranging from five to 30 feet in size, and enclosures of one to 50 acres large. 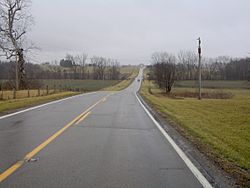 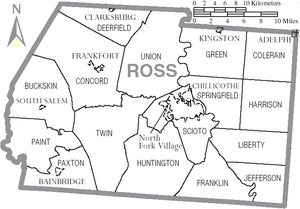 Map of Ross County, Ohio With Municipal and Township Labels

Pickaway-Ross lies in the Northern part of the county. Students from the following affiliated Ross and Pickaway county districts attend the vocational school:

Ohio University established a regional campus in Chillicothe in 1966. The university has over 2,500 students enrolled as of 2010, ranging from traditional-aged students and non-traditional learners.

All content from Kiddle encyclopedia articles (including the article images and facts) can be freely used under Attribution-ShareAlike license, unless stated otherwise. Cite this article:
Ross County, Ohio Facts for Kids. Kiddle Encyclopedia.