Pickaway County is a county in the U.S. state of Ohio. As of the 2020 census, the population was 58,539. Its county seat is Circleville. Its name derives from the Pekowi band of Shawnee Indians, who inhabited the area. (See List of Ohio county name etymologies.) 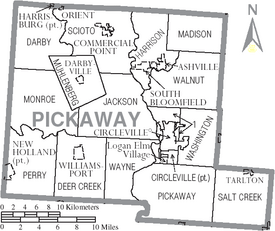 Map of Pickaway County, Ohio with municipal and township labels

Manufacturing makes up a significant proportion of area industry and employment; in the 2010 census, 3075 county residents (13.4%) were employed in manufacturing. Circleville is home to the largest DuPont chemical plant in Ohio. Opened in the 1950s, it produces Mylar and Tedlar plastic films, the latter used extensively in the production of photovoltaic modules.

Other manufacturing concerns in Circleville or surrounding Pickaway County include Aleris, a producer of rolled and extruded aluminum products, and Florida Production Engineering (FPE), producing plastic injection molded components for the automotive industry. Georgia-Pacific, a manufacturer of paperboard containers and other paper products, has a plant located south of Circleville. The PPG Industries Circleville plant is the company's center for polymer resin production, primarily for automotive applications.

Businesses that formerly operated include the Jefferson-Smurfit paper mill, a 300-acre site, that is being redeveloped. American Electric Power (AEP) owned the Picway Power Plant in the northern part of Pickaway County. The coal-fired power plant operated from 1926 to 2015. A GE Lighting plant opened in 1948. The plant closed in 2017. RCA/Thomson Glass operated from 1970 until its closing around 2006.

Teays Valley is in the northern part of the county. Schools in this district include:

Teays Valley has the largest number of students in the county at 4,374 total students.

Logan Elm consists of the area in Southeastern Pickaway County.

Westfall lies in the Western part of the county.

"Dr. Gay Hitler" redirects here. It is not to be confused with Gay Hitler.

Pickaway County is also known for its various places with the name "Hitler," including Hitler Road, Hitler-Ludwig Road, Hitler-Ludwig Cemetery, and Hitler Park. They are not named after Adolf Hitler but a local historical family named the Hitlers, described by a local paper in 2011 as "fine, upstanding citizens." The family included George Washington Hitler and his son, Dr. Gay Hitler, who worked as a local dentist between 1922 and 1946.

All content from Kiddle encyclopedia articles (including the article images and facts) can be freely used under Attribution-ShareAlike license, unless stated otherwise. Cite this article:
Pickaway County, Ohio Facts for Kids. Kiddle Encyclopedia.