Kids Encyclopedia Facts
Not to be confused with Centerville, Ohio.

Circleville is a city in and the county seat of Pickaway County, Ohio, United States, set along the Scioto River, 25 miles (40.2 km) south of Columbus. The population was 13,314 at the 2010 census. The city is best-known today as the host of the Circleville Pumpkin Show, an annual festival held since 1903.

The city's name is derived from its original layout created in 1810 within the 1,100 ft (340 m) diameter of a circle of a Hopewell tradition earthwork dating to the early centuries of the Common Era. The county courthouse was built in the center of the innermost circle. By the late 1830s, for numerous reasons residents decided to gain authorization from the state legislature to change the layout to a standard grid, which was accomplished by the mid-1850s. All traces of the Hopewell earthwork were destroyed in Circleville, although hundreds of other monuments may be found in the Ohio Valley. 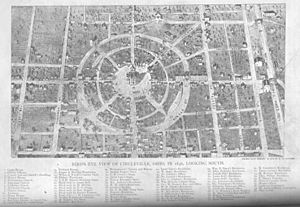 A map of Circleville from 1836

By the mid-18th century, the Lenape (Delaware Indians) were pushed west from Pennsylvania by English-led settlers flowing into the colony. The Lenape were given permission by the Wyandot to settle in the Ohio country. One of their settlements was Maguck, built by 1750 on the banks of the Scioto River. Modern Circleville was built to the north of this site.

Noted frontier explorer Christopher Gist was the first recorded European visitor to the Circleville area. Gist reached Maguck, the small Lenape village of about 10 families on the east bank of the Scioto River, on January 20, 1751. He wrote that he had stayed in the town for four days.

Circleville was founded by European-American settlers in 1810, as migrants moved west after the American Revolutionary War. It derived its name from the circular portion of what is now known to have been a large Hopewell culture earthwork; the town was built on top of the remains of this. The original town plan integrated Circleville into the remains of the Hopewell earthworks with a street layout 1100-foot diameter circle. This was connected to a 900-foot square. These dated from the early Common Era; the Hopewell tradition flourished up to 500CE. An octagonal courthouse was placed directly in the center circle of the town.

The Hopewell circles were documented by Caleb Atwater, a resident and historian who was considered an early archeologist; the earthworks were illustrated in Plate 5 of his Description of the Antiquities Discovered in the State of Ohio and Other Western States, a 160-page report he published in 1820 in the first volume of the Transactions of the American Antiquarian Society.

Dissatisfaction among residents rose over Circleville's layout, however. In 1837 at the request of the town, the Ohio General Assembly authorized the "Circleville Squaring Company" to convert the town plan into a squared grid, as was typical of other platted towns. In 1856, this had been completed in several phases. No traces of the original earthworks remain. A few of the older buildings have curved walls built to conform to the town's original circular layout.

On October 13, 1999, an F-3 tornado hit the city, set off by a squall line moving through the region. The tornado touched down on the north side of town, doing substantial damage to a barber shop and a masonry building. A furniture store was also damaged with a hole in its roof, where it was reported that items from inside the store were sucked out. Damage to nearby buildings occurred as the tornado moved east across the north-central part of town.

The tornado moved into a residential area in the Northwood Park neighborhood, destroying several homes along Fairlawn Drive. Trees and vehicles were also heavily damaged. The tornado lifted as it crossed Edgewood Drive, but snapped the tops of some nearby trees.

Ohio Christian University, an institution affiliated with Churches of Christ in Christian Union, has been in operation at Circleville since 1948.

Circleville has a public library, a branch of the Pickaway County Library. 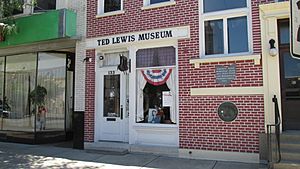 The Ted Lewis Museum, the last remaining building from the town's circular plan

All content from Kiddle encyclopedia articles (including the article images and facts) can be freely used under Attribution-ShareAlike license, unless stated otherwise. Cite this article:
Circleville, Ohio Facts for Kids. Kiddle Encyclopedia.