Washington County is a county located in the southeastern part of the U.S. state of Ohio. As of the 2020 census, the population was 59,711. Its county seat is Marietta. The county, the oldest in the state, is named for George Washington. 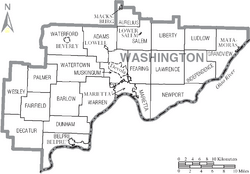 Map of Washington County, Ohio With Municipal and Township Labels 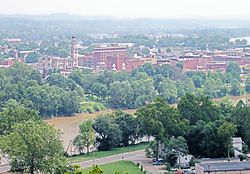 Downtown Marietta and the Muskingum River in July 2006

There are six high schools that serve the people of Washington County (as of 2016).

All content from Kiddle encyclopedia articles (including the article images and facts) can be freely used under Attribution-ShareAlike license, unless stated otherwise. Cite this article:
Washington County, Ohio Facts for Kids. Kiddle Encyclopedia.