Noble County is a county located in the U.S. state of Ohio. As of the 2020 census, the population was 14,115, making it the fourth-least populous county in Ohio. Its county seat is Caldwell. The county is named for Rep. Warren P. Noble of the Ohio House of Representatives, who was an early settler there.

Noble County was formed on March 11, 1851 from portions of Guernsey, Morgan, Monroe and Washington counties.

Noble County was home to the first North American oil well, the Thorla-McKee Well, discovered in 1814. It was the last of Ohio's 88 counties to be formed, in 1851. In 1925, a United States Navy dirigible, USS Shenandoah (ZR-1), was caught in a storm over Noble County, and broke into several pieces. Of those on board, 14 were killed and 29 survived. 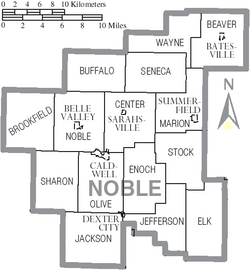 Map of Noble County, Ohio with municipal and township labels

All content from Kiddle encyclopedia articles (including the article images and facts) can be freely used under Attribution-ShareAlike license, unless stated otherwise. Cite this article:
Noble County, Ohio Facts for Kids. Kiddle Encyclopedia.