Kids Encyclopedia Facts
Not to be confused with Monroe, Ohio.

Monroe County is a county located on the eastern border of the U.S. state of Ohio, across the Ohio River from West Virginia. As of the 2020 census, the population was 13,385, making it the second-least populous county in Ohio. Its county seat is Woodsfield. The county was created in 1813 and later organized in 1815.

Monroe County was formed on January 28, 1813 from portions of Belmont, Guernsey and Washington counties. It was named after James Monroe, the U.S. Secretary of State when the county was formed, and later fifth President of the United States. 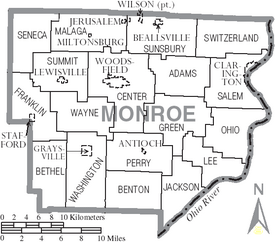 Map of Monroe County, Ohio with municipal and township labels

All content from Kiddle encyclopedia articles (including the article images and facts) can be freely used under Attribution-ShareAlike license, unless stated otherwise. Cite this article:
Monroe County, Ohio Facts for Kids. Kiddle Encyclopedia.