The Utica Shale is a stratigraphical unit of Upper Ordovician age in the Appalachian Basin. It underlies much of the northeastern United States and adjacent parts of Canada.

It takes the name from the city of Utica, New York, as it was first described as an outcrop along the Starch Factory Creek east of the city by Ebenezer Emmons in 1842. 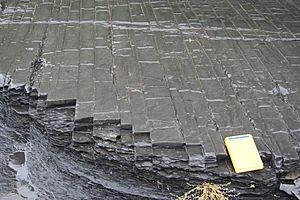 Rectangular joints within siltstone and black shales of the Utica Shale near Fort Plain, New York

The Utica Shale is composed of calcareous, organic, and rich shale.

The Utica shale is a major source of tight gas in Quebec, and is rapidly becoming so in Ohio.

Drilling and producing from the Utica Shale began in 2006 in Quebec, focusing on an area south of the St. Lawrence River between Montreal and Quebec City. Interest has grown in the region since Denver-based Forest Oil Corp. announced a significant discovery there after testing two vertical wells. Forest Oil said its Quebec assets may hold as much as four trillion cubic feet of gas reserves, and that the Utica shale has similar rock properties to the Barnett Shale in Texas.

Forest Oil, which has several junior partners in the region, has drilled both vertical and horizontal wells. Calgary-based Talisman Energy has drilled five vertical Utica wells, and began drilling two horizontal Utica wells in late 2009 with its partner Questerre Energy, which holds under lease more than 1 million gross acres of land in the region. Other companies in the play are Quebec-based Gastem and Calgary-based Canbriam Energy.

The Utica Shale in Quebec potentially holds 4×10^12 cu ft (110×10^9 m3) at production rates of 1×10^6 cu ft (28,000 m3) per day. From 2006 through 2009 24 wells, both vertical and horizontal, were drilled to test the Utica. Positive gas flow test results were reported, although none of the wells were producing at the end of 2009. Gastem, one of the Utica shale producers, took its Utica Shale expertise to drill across the border in New York state.

The province of Quebec imposed a moratorium on hydraulic fracturing in March 2012. 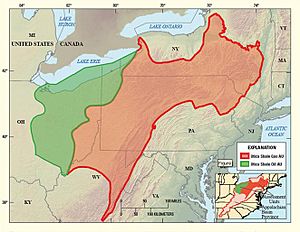 Utica Shale drilling and production began in Ohio in 2011. Ohio as of 2013 is becoming a major natural gas and oil producer from the Utica Shale in the eastern part of the state. Map of Ohio Utica Shale drilling permits and activity by date. In 2011 drilling and permits for drilling in the Utica Shale in Ohio reached record highs. Although the prospective Utica area extends into Pennsylvania and West Virginia, as of 2013 most activity has been in Ohio, because the Ohio portion is believed to be richer in oil, condensate, and natural gas liquids.

In 2009, the Canadian company Gastem, which had been drilling gas wells into the Utica Shale in Quebec, drilled the first of its three state-permitted Utica Shale wells in New York. The first well drilled was in Otsego County.

New York imposed a moratorium on large-volume hydraulic fracturing in 2008. This was renewed by Governor Andrew Cuomo in 2014, and continues as of December 2017.

The Utica Shale lies under most of New York, Pennsylvania, Ohio, and West Virginia, and extends under adjacent parts of Ontario and Quebec in Canada and Kentucky, Maryland, Tennessee, and Virginia in the United States.

It occurs in outcrops in the state of New York and in the subsurface in the provinces of Quebec and Ontario.

Parts of the Utica shale underlie the Island of Montreal, and its weakness relative to the Trenton and Chazy limestones under much of the rest of the island complicated the construction of the Montreal metro. Some stations had to be built cut-and-cover or with a narrow split platform profile to reduce the load on the bedrock. In particular, De l'Église station suffered a cave-in during construction and had to be hastily replanned.

In some regions of Pennsylvania, the Utica Shale reaches to almost two miles below water level. However, the depth of the Utica Shale rock decreases to the west into Ohio and to the northwest towards Canada.

The Utica Shale underlies the Lorraine Group and overlies the Trenton Group limestone and the Canajoharie shale in the Mohawk River valley.

The Utica Shale is divided into the Nowadaga Zone, Loyal Creek Zone and Holland Patent Zone.

It lies a few thousand feet under the Marcellus Shale.

All content from Kiddle encyclopedia articles (including the article images and facts) can be freely used under Attribution-ShareAlike license, unless stated otherwise. Cite this article:
Utica Shale Facts for Kids. Kiddle Encyclopedia.