Island of Montreal facts for kids

The Island of Montreal (French: Île de Montréal), in southwestern Quebec, Canada, is the site of the city of Montreal. It is located at the confluence of the Saint Lawrence and Ottawa rivers. It is separated from Île Jésus (Laval) by the Rivière des Prairies. 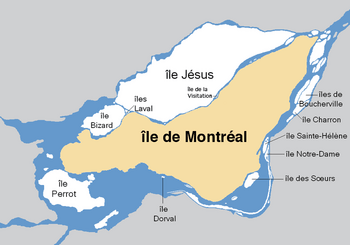 The Island of Montreal is a boomerang-shaped Island part of the Hochelaga Archipelago.

The St. Lawrence widens into Lake Saint-Louis southwest of the island, narrows into the Lachine Rapids, then widens again into the Bassin de La Prairie before narrowing again and flowing toward Quebec City and the Atlantic Ocean. Saint Helen's Island and Notre Dame Island are in the Saint Lawrence southeast of downtown Montreal, and Nuns' Island is located southwest of downtown. The river forms the Lachine Rapids to the west of the island between Lake Saint-Louis and the Bassin de La Prairie, and the Rapides Sainte-Marie between the island and Saint Helen's Island. The Ottawa widens and becomes Lac des Deux-Montagnes north-west of the island. Natural watercourses on either side of Île Perrot, as well as the Sainte-Anne-de-Bellevue Canal on the western tip of the Island of Montréal, connect Lac des Deux-Montagnes and Lake Saint-Louis. Another outlet of Lac des Deux-Montagnes, the Rivière des Prairies, flows along the north shore of the island, separating it from Île Bizard and Île Jésus, and flows into the St. Lawrence at the northeastern tip of the Island of Montreal, while the Rivière des Mille-Îles separates Île Jésus from the northern mainland. 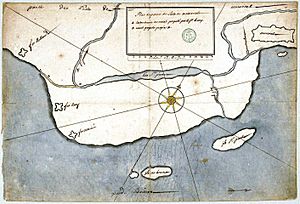 The topography of the island has been significantly altered by human activity, as evidenced by historical maps that name a lake St. Pierre in the island. This lake, and several other watercourses, have been drained or covered over as the city developed, while areas on the island's shores have been reclaimed and extended. The southwest of the island is separated by the Lachine Canal between Lachine and Montreal's Old Port; this portion of the island is partially divided further by the Canal de l'Aqueduc, running roughly parallel to the Lachine Canal, beginning in the borough of LaSalle and continuing between the boroughs of Le Sud-Ouest and Verdun.

Most of the bedrock of the island consists of Chazy limestone, with some Utica shale. At the centre of the island stand the three peaks of Mount Royal, a volcanic intrusion (not an extinct volcano, contrary to popular belief). This short mountain (elevation 233 metres, 765') is a member of, and gives its name to, the Monteregian Hills.

The island of Montreal is the major component of the territory of the city of Montreal, along with Île Bizard, Saint Helen's Island, Notre Dame Island, Nuns' Island, and some 69 smaller islands. With a population of 2,014,221 inhabitants (22% of the population of Québec), it is by far the most populous island in Canada. It is also the 6th most populous island of the Americas and the 37th most populated island on Earth, outranking Manhattan Island in New York City. In addition, it is the world's most populous island surrounded by fresh water. Montreal and the other municipalities on the island compose the administrative region of Montréal. The area of the Urban agglomeration of Montreal, which includes the Island of Montreal and several other smaller islands, is 499 km² (193 sq. mi.).

The crossings which connect the island to its surroundings are some of the busiest bridges in the country and the world. The Champlain Bridge and the Jacques Cartier Bridge together accommodate 101 million vehicle crossings a year. 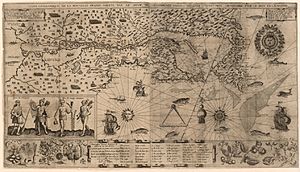 Map of New France (Champlain, 1612). "Montreal" is visible on the map next to a mountain in the approximate location. A more precise map was drawn by Champlain in 1632.

The first French name for the island was l'ille de Vilmenon, noted by Samuel de Champlain in a 1616 map, and derived from the sieur de Vilmenon, a patron of the founders of Quebec at the court of Louis XIII. However, by 1632 Champlain referred to the Isle de Mont-real in another map. The island derived its name from Mount Royal (French Mont Royal, then pronounced [mɔ̃rwɛjal]), and gradually spread its name to the town, which had originally been called Ville-Marie.

In the Kanien’kéha, the island is called Tiohtià:ke Tsi (a name referring to the Lachine Rapids to the island's southwest) or Ka-wé-no-te. In Anishninaabemowin, the land is called Mooniyaang (borrowed from the French word for the city). 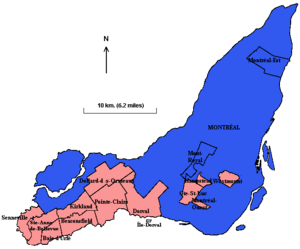 All content from Kiddle encyclopedia articles (including the article images and facts) can be freely used under Attribution-ShareAlike license, unless stated otherwise. Cite this article:
Island of Montreal Facts for Kids. Kiddle Encyclopedia.