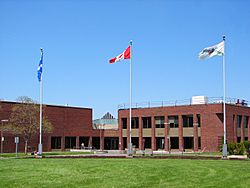 Dollard-des-Ormeaux (often referred to as D.D.O. or simply Dollard) is a predominantly English-speaking on-island suburb of Montreal in southwestern Quebec, Canada. The town was named after French martyr Adam Dollard des Ormeaux.

The town was merged with the city of Montreal for several years, but its residents elected to reinstate the city as a separate entity in 2006.

In 2001, the official Commission de toponymie du Québec ruled that the correct way to write the city's name was Dollard-Des Ormeaux (one hyphen, one space, all title caps). However, this was not widely accepted and is rarely used in practice. In particular, as of 2014[update], the city's own website does not use this way of writing the city's name.

On July 29, 1924, Dollard-des-Ormeaux detached from the Parish of Ste-Geneviève and became a separate municipality in response to a tax imposed by the Parish road improvements on Gouin Boulevard. Its first mayor was Hormidas Meloche.

The town's name honours the French martyr Adam Dollard des Ormeaux, who was killed by the Iroquois at Long Sault in 1660.

The City of Dollard-des-Ormeaux obtained a new charter and was incorporated as a city on February 4, 1960.

One of its original main axes, Anselme-Lavigne Street in the Westpark neighbourhood, is named for a farmer who sold his land to the Belcourt Construction Company. Many of the streets in the Sunnydale neighbourhood, including "Sunshine" and "Hyman", are named for members in the prominent Zunenshine family who owned Belcourt. The community is a mixture of residential and commercial properties. Des Sources and St-Jean Boulevards are its main commercial arteries.

The Town Hall was located in a house on Des Sources Boulevard in the early 1960s, and was moved to an 1806 French-Canadian farmhouse in 1964.

During Canada's centennial anniversary in 1967, the town decided to create a "Centennial Park," featuring a man-made lake and hills. It was suggested to use this project for a reservoir for stormwater drainage, as the City was faced with the need to expand surface drainage pipes. However the project ran into problems and became a local scandal and a major drain on resources. It was finally completed in the 1970s, albeit overdue and overbudget.

Dollard-des-Ormeaux was included in the Montreal Urban Community when that government was created in 1970.

On January 1, 2002, as part of the 2002–2006 municipal reorganization of Montreal, it merged with the city of Montreal and became part of the Dollard-Des Ormeaux–Roxboro borough. After a change of government and a 2004 demerger referendum, Dollard-des-Ormeaux was reconstituted as an independent city on January 1, 2006. It is now the Montreal Island's most populous city outside Montreal.

Dollard is known for its many well-attended green spaces, providing a park within one kilometre of each home. Notable parks include Centennial Park, Westminster Park and Baffin Park.

Dollard-des-Ormeaux is home to the Dollard Civic Centre, which serves as city hall, the public library and houses ice skating and swimming facilities.

All content from Kiddle encyclopedia articles (including the article images and facts) can be freely used under Attribution-ShareAlike license, unless stated otherwise. Cite this article:
Dollard-des-Ormeaux Facts for Kids. Kiddle Encyclopedia.