Mount Royal (French: Mont-Royal, officially Town of Mount Royal, French: Ville de Mont-Royal, abbreviated TMR, French: VMR) is an affluent on-island suburban town located on the northwest side of the eponymous Mount Royal, northwest of Downtown Montreal, on the Island of Montreal in southwestern Quebec, Canada. It is completely surrounded by Montreal. The population was 20,276 as of the Canada 2016 Census. In 2008, most of the Town of Mount Royal was designated a National Historic Site of Canada, as a "[remarkable] synthesis of urban renewal movements of the early 20th century, reflecting the influence of the City Beautiful, Garden City and Garden Suburb movements". The town celebrated its 100th anniversary in 2012.

Town of Mount Royal, or TMR, was founded in 1912. It was created at the initiative of the Canadian Northern Railway. The town was designed by Frederick Todd, a planner who was heavily influenced by the likes of Ebenezer Howard and incorporated many aspects of the Garden City Movement as well some elements of the earlier City Beautiful movement into his design. The plan was to build a model city at the foot of Mount Royal. The company bought 4,800 acres (1,900 ha) of farmland, and then built a rail tunnel under Mount Royal connecting their land to downtown Montreal. The profits from the venture helped finance the development of Canadian Northern's transcontinental railroad, which eventually became a significant constituent of the Canadian National Railway system. The town was designed by Canadian Northern's chief engineer, Henry Wicksteed, based loosely on Washington, D.C.

Plan of "Model City" and of the Mount Royal Tunnel

TMR has always been an upper-income community, and until the 1960s its population was majority Anglophone. This began to change after the Quiet Revolution, as francophones gained access to better-paying careers. The town became popular and today the community is 46% francophone and home to a significant Arab and Asian Canadian population.

On January 1, 2002, as part of the 2002–2006 municipal reorganization of Montreal, it was merged into Montreal and became a borough. However, after a change of government and a 2004 referendum, it was re-constituted as an independent town on January 1, 2006.

One notable feature of the town is the naming of some of its streets, and also its occasionally idiosyncratic numbering system. Some streets which pass through the town may thus bear two names (in whichever language). For example, Jean Talon Street, a large East-West thoroughfare crossing Montreal for kilometers (miles), goes a few hundred meters (yards) through TMR under the name of Dresden Avenue, only to recover its Montreal name on the other side of the town. This situation has been recently addressed by putting the two names on the street signs. On these few hundred meters, TMR uses a house civic numbering totally different from that of Montreal on either side. This sort of change in the numbering system also occurs on smaller streets shared by both Montreal and TMR (for example, Trenton, Lockhart and Brookfield avenues, where the TMR numbering system decreases from East to West, only to jump from 2 to 2400 on the few meters (yards) of the street that still belong to Montreal. 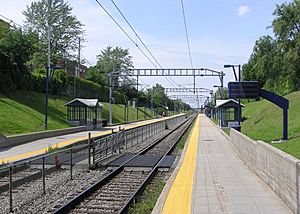 The former Mont-Royal station served many commuters to Downtown Montreal. Work is now underway to convert it to an REM station.

Two main thoroughfares, Laird Boulevard and Graham Boulevard, cut across the borough diagonally and meet at Connaught Park, a green space located in the centre. Mount Royal Train Station, a commuter train station on the Exo Deux-Montagnes line is located to the east of this park. This line is now undergoing construction to upgrade it for the new REM network. Trains going through the Mount Royal Tunnel link the station to downtown Montreal in eight minutes. Both avenues end at Jean Talon Street and close to the highway.

TMR is surrounded on three sides by a highway, a fence and a rail line.

The highway is Metropolitan Boulevard, a major constituent of Autoroute 40. It was built as an elevated highway throughout, except when it passes through TMR (between Sainte Croix Avenue and L'Acadie Boulevard), since the Town council requested that it be built on the ground, in order to separate the town from the industrial area to the north.

A fence runs along the eastern border with Park Extension at L'Acadie Boulevard, a six lane thoroughfare. The stated purpose of the fence is to prevent children and house pets from running into the busy thoroughfare but some have contended that it was built to keep residents of the working-class Park Extension neighbourhood out of the town. 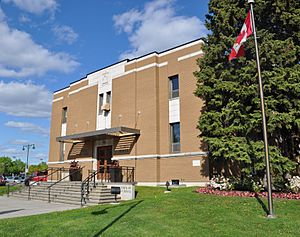 The first mayor of the town of Mount-Royal was Thomas S. Darling, who was elected in 1913. 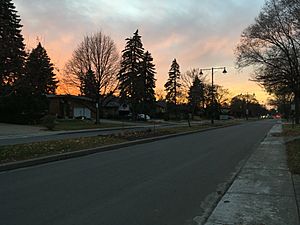 Rockland Road in Mount-Royal at dusk

Philippe Roy was elected mayor by acclamation in a by-election in 2010, then again in a general election in 2013. TMR is divided into six electoral districts. Only the Town mayor sits on the agglomeration council of Montreal.

The English Montreal School Board (EMSB) operates Anglophone public schools in the town.

The Town has its own library, Reginald J. P. Dawson Library, which is independent from the Montreal Library Network.

All content from Kiddle encyclopedia articles (including the article images and facts) can be freely used under Attribution-ShareAlike license, unless stated otherwise. Cite this article:
Mount Royal, Quebec Facts for Kids. Kiddle Encyclopedia.