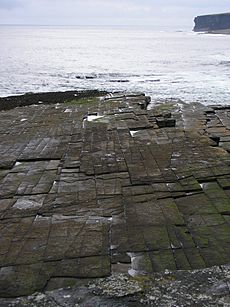 Joint sets on a plane of flagstones, Scotland

In geology, a joint is a fracture dividing rock into two sections that moved away from each other. A joint does not involve shear displacement, and forms when tensile stress breaches its threshold. In other kinds of fracturing, like in a fault, the rock is parted by a visible crack that forms a gap in the rock.

Joints push out in various directions, usually vertically. They can have smooth, clean surfaces, or they can be scarred from sliding against another joint. Joints usually occur as sets, with each set made up of joints that are parallel to each other.

Joints become more and more obvious when the rock is weathered (eroded by the elements). When water gets into the joints, this can lead to the formation of big caves and underground rivers.

All content from Kiddle encyclopedia articles (including the article images and facts) can be freely used under Attribution-ShareAlike license, unless stated otherwise. Cite this article:
Joint (geology) Facts for Kids. Kiddle Encyclopedia.