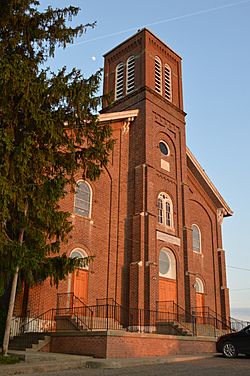 Fulda was platted in 1861. The community was named after Fulda, in Germany, the native land of a large share of the early settlers. A post office was established at Fulda in 1875, and remained in operation until 1904.

The Immaculate Conception Catholic Church in Fulda is listed on the National Register of Historic Places.

All content from Kiddle encyclopedia articles (including the article images and facts) can be freely used under Attribution-ShareAlike license, unless stated otherwise. Cite this article:
Fulda, Ohio Facts for Kids. Kiddle Encyclopedia.