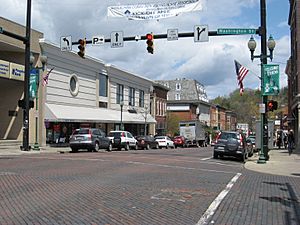 Athens County is a county in southeastern Ohio. As of the 2020 census, the population was 62,431. Its county seat is Athens. The county was formed in 1805 from Washington County. Because the original state university (Ohio University) was founded there in 1804, the town and the county were named for the ancient center of learning, Athens, Greece.

Athens County is located in the Unglaciated Allegheny Plateau region of Ohio. It features steep, rugged hills, with typical relief of 150 to 400 feet, deeply dissected by stream valleys, many of them remnant from the ancient Teays River drainage system. Most of Athens County is within the Hocking River watershed, with smaller areas in the Shade River and Raccoon Creek watersheds. The Hocking River joins the Ohio River at the unincorporated village of Hockingport in Athens County. 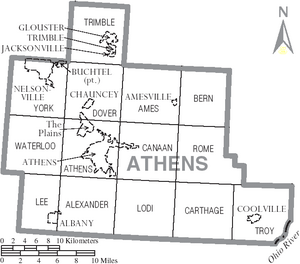 Map of Athens County, Ohio With Municipal and Township Labels

Historically, the first large-scale industry was salt production. Coal mining and timber harvesting played major roles in Athens County's economy, as did the treatment and care of the mentally ill.

The coal industry has declined dramatically from its peak years. Only Buckingham Coal is still mining in the county, in Trimble Township north of Glouster. Gravel and limestone are mined at several quarries in the county. Active oil and natural gas wells are found in low numbers throughout Athens County.

Forestry still contributes to the Athens County economy, both in the private sector and in the public sector. The headquarters for Wayne National Forest is located between Athens and Nelsonville.

Farming and market gardening continue to thrive in the area. The largest farms specialize in beef and dairy production. The Athens Farmers Market, an outdoor market, continues to grow in popularity. Local and organically grown produce is found in abundance during the summer months.

Also, tourism is a large and growing component of the county's economy. The county is a regional music center and home to many arts and crafts businesses. Many visitors to the county are drawn to its natural resources and abundant wildlife. Hunting and fishing are popular activities in season. The county has over 19 miles of paved bike path in and between Athens and Nelsonville. Hiking and mountain biking are popular throughout the county, especially in the state parks and national forest.

Higher education remains the cornerstone of the county's economy. Over one-quarter of the county's residents either attend or work at Hocking College or Ohio University.

Ohio University in the Fall

Athens County is home to Hocking College in Nelsonville and Ohio University in the City of Athens.

They are also served by the Athens County Public Libraries with branches in Albany, Athens, Chauncey, Coolville, Glouster, Nelsonville, and The Plains.

All content from Kiddle encyclopedia articles (including the article images and facts) can be freely used under Attribution-ShareAlike license, unless stated otherwise. Cite this article:
Athens County, Ohio Facts for Kids. Kiddle Encyclopedia.