Hocking County is a county located in the U.S. state of Ohio. As of the 2020 census, the population was 28,050. Its county seat is Logan. The county was organized on March 1, 1818, from land given by Athens, Fairfield, and Ross counties. Its name is from the Hocking River, the origins of which are disputed but is said to be a Delaware Indian word meaning "bottle river". 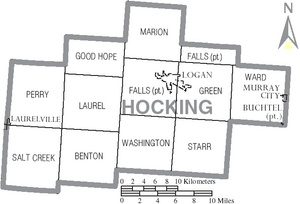 Map of Hocking County with municipal and township boundaries

All content from Kiddle encyclopedia articles (including the article images and facts) can be freely used under Attribution-ShareAlike license, unless stated otherwise. Cite this article:
Hocking County, Ohio Facts for Kids. Kiddle Encyclopedia.