Kids Encyclopedia Facts
Not to be confused with Vinton, Ohio.

Vinton County is a county located in the U.S. state of Ohio. As of the 2020 census, the population was 12,800, making it the least populous county in the state. Its county seat is McArthur. The county is named for Samuel Finley Vinton, US Representative from Ohio (1823–37, 1843–51).

Vinton County has one public airport, the Vinton County Airport (K22I/22I). The runway is a 3725' x 75' asphalt, east-west (09/27) runway with a single intersecting taxiway. Navigation and radio equipment includes a two-light PAPI for runway 27, Pilot Controlled Lighting and UNICOM.

The airport is leased to the Vinton County Pilots & Booster Association by the County, who raise funds to maintain and update the airport. As of 2015[update], the boosters are raising funds to finance a 2000-foot runway extension and resurfacing project. The airport is equipped to provide basic service to piston-engined general aviation aircraft. Flight instruction services are also available. 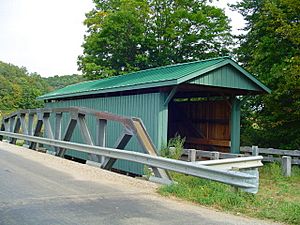 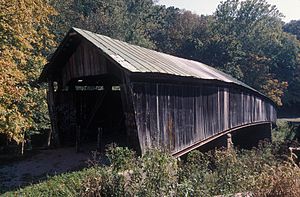 Ponn Covered Bridge prior to arson

There are four covered bridges located around Vinton County. The most famous bridge was the Ponn Bridge, also known as the Humpback Bridge. It was built in 1874 and was the longest one in the county. The bridge's name came from the shape of the bridge and there are only a few 'humpback' bridges left around the world. This bridge was burned down in June, 2013 by arsonists. In 1875, the Mt. Olive Bridge was built by a Civil War veteran named George Washington Pilcher. This bridge is open to foot traffic and goes over the Middle Fork Salt Creek. The Bay Bridge is located on the Vinton County Fairgrounds. It was moved to the fairgrounds in 1967 and is still open to pedestrians. The Cox Bridge was built in 1884. The bridge is open to foot traffic and has a picnic area near it. The Arbaugh Bridge was built in 1871, making it the oldest covered bridge in the county. The bridge is the only one open to vehicles thanks to a grant that allowed for renovations. 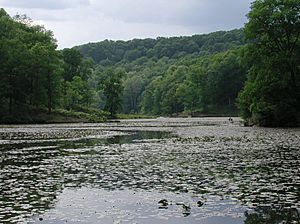 There are eight recreation areas in Vinton County. The state parks consist of Lake Alma State Park located in Wellston, Ohio and Lake Hope State Park located in McArthur, Ohio. There are also three state forests consisting of Richland Furnace State Forest, Tar Hollow State Forest, and Zaleski State Forest. Along with these, there is the Wayne National Forest, which covers many other counties in Ohio besides Vinton County, Raccoon Ecological Management Area located on State Route 160, and the Wellston Wildlife Area and Lake Rupert located on State Route 683. There are also many more public areas within a short distance of Vinton County.

There are two trails in Zaleski State Forest, a trail of 23.5 miles and a day trail of 10 miles.

Throughout Vinton County, 27 quilt barns are scattered by the roadways. They are located on Vinton County's Quilt Trail.

The Wild Turkey Festival is a music festival held in McArthur, Ohio, on the first weekend of May, beginning on the Thursday evening and concluding on the Sunday afternoon. A parade runs through the town on the Saturday night.

Every August, the Ridgetop Music Festival is held at the Vinton County Airport which offers music and airplane rides throughout the festival.

The air show is held on the third Sunday in September. The show is the biggest free air show in Ohio and includes food and aerial acts. 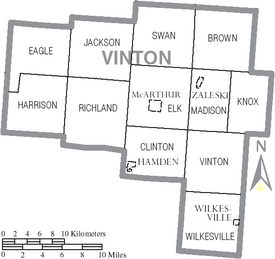 Map of Vinton County, Ohio with municipal and township labels

The entire county is served by the Vinton County Local School District which operates the following schools:

All content from Kiddle encyclopedia articles (including the article images and facts) can be freely used under Attribution-ShareAlike license, unless stated otherwise. Cite this article:
Vinton County, Ohio Facts for Kids. Kiddle Encyclopedia.