Meigs County is a county located in the U.S. state of Ohio. As of the 2020 census, the population was 22,210. Its county seat is Pomeroy. The county is named for Return J. Meigs Jr., the fourth Governor of Ohio.

Meigs County lies in the Appalachian Plateau physiographic region of the Appalachian Mountains. The landscape is considered to be anywhere from gently rolling to rugged, typical of a dissected plateau. Elevations range from 1,020 feet (310 m) asl (above sea level) in the southwest to about 535 feet (163 m) asl in the far south central part of the county along the Ohio River. The majority of Meigs County is drained by two subwatersheds of the Ohio River, Shade River and Leading Creek. Another stream of note is Raccoon Creek, which flows through a small area of the northwestern corner of the county.

Coal mining, both strip and underground, has been an important industry in Meigs County since the late 19th century, although mining of all types largely ceased by the 1990s. The effects of mining are still readily seen on the landscape today. Features such as high walls, spoil piles, and irregular topography are still prevalent. Many tributaries in the Leading Creek basin are plagued by acid mine drainage and sedimentation.

In 2009, Gatling, Ohio LLC invested $75 million to open a new coal mine and coal prep plant near Racine. It is capable of employing 120 to 150 miners, and is capable of producing 3.5 million marketable tons of coal per year.

Meigs County's climate is considered humid continental, with warm to hot, humid summers and cool to cold, wet winters. Precipitation averages 41" annually, spread evenly throughout the year. High July temperatures average in the upper 80s F, while lows average in the low to mid 60s F. Temperatures above 90* F in the summer are common. January highs average about 40* F, with lows in the lower 20s. Temperatures around or even below 0* F occur during most winters. Snowfall averages 20–25", falling between late November and the first week of April.

The Ohio River creates a microclimate in its valley where temperatures tend to be moderated by the river, hence resulting in longer growing seasons compared to the rest of the county. Other microclimates, known as frost hollows or frost pockets, exist throughout the county in small isolated valleys. Nocturnal temperatures are often several degrees colder than the surrounding terrain. 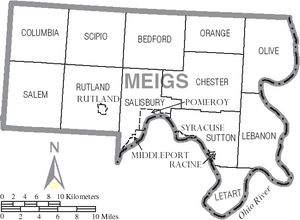 Map of Meigs County, Ohio with municipal and township labels 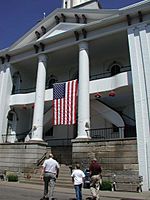 All content from Kiddle encyclopedia articles (including the article images and facts) can be freely used under Attribution-ShareAlike license, unless stated otherwise. Cite this article:
Meigs County, Ohio Facts for Kids. Kiddle Encyclopedia.