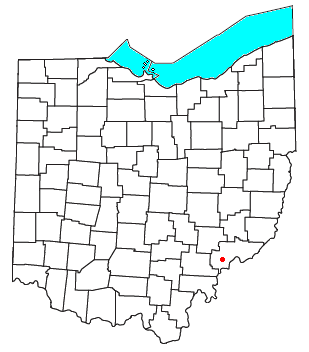 Vincent is a census-designated place in southern Barlow Township, Washington County, Ohio, United States. Although it is unincorporated, it has a post office, with the ZIP code of 45784. It lies along State Route 339 near Tupper Creek, a subsidiary of the Little Hocking River, which in turn meets the Ohio River at Little Hocking to the south.

Vincent had its start when the Marietta & Cincinnati Railroad was extended to that point. The community was founded as Vincents Station in 1853 by Henry Earle Vincent, and named for him. A post office called Vincent has been in operation since 1857.

All content from Kiddle encyclopedia articles (including the article images and facts) can be freely used under Attribution-ShareAlike license, unless stated otherwise. Cite this article:
Vincent, Ohio Facts for Kids. Kiddle Encyclopedia.