Kids Encyclopedia Facts
Not to be confused with Fayette, Ohio.

Fayette County is a county located in the U.S. state of Ohio. As of the 2020 census, the population was 28,951. Its county seat is Washington Court House. The county was named for the Marquis de Lafayette, a Frenchman who was an officer in the American Army in the Revolution, when established on March 1, 1810.

Fayette County was formed on March 1, 1810 from portions of Highland County and Ross County. It was named after Marie-Joseph Motier, Marquis de La Fayette, a French general and politician who took the side of the Colonials during the American Revolutionary War and who played an important role in the French Revolution.

Fayette County Airport is a general aviation facility owned by the county and located northeast of the city of Washington Court House. 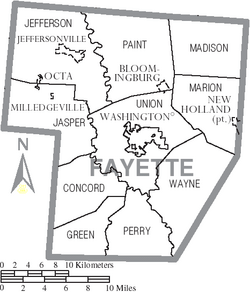 Map of Fayette County, Ohio with Municipal and Township Labels

All content from Kiddle encyclopedia articles (including the article images and facts) can be freely used under Attribution-ShareAlike license, unless stated otherwise. Cite this article:
Fayette County, Ohio Facts for Kids. Kiddle Encyclopedia.