Good Hope is an unincorporated community and census-designated place (CDP) in central Wayne Township, Fayette County, Ohio, United States. As of the 2010 census the population was 234.

It lies at the intersection of State Route 753 with Washington-Good Hope and Camp Grove Roads. Indian Creek, which meets Paint Creek slightly more than 2 miles (3 km) to the south, runs on the western edge of Good Hope. It is located midway between Greenfield and Washington Court House, the county seat of Fayette County.

Good Hope was platted in 1849, although a small village had already existed there for some time. The community is said to derive its name from Good Hope, Pennsylvania, the native home of a share of the early settlers. A post office was established at Good Hope in 1851, and remained in operation until 1965.

It was only in 2012 that Good Hope had a waste treatment plant. 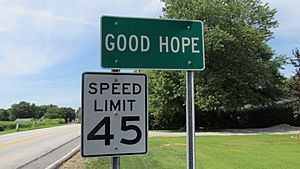 All content from Kiddle encyclopedia articles (including the article images and facts) can be freely used under Attribution-ShareAlike license, unless stated otherwise. Cite this article:
Good Hope, Ohio Facts for Kids. Kiddle Encyclopedia.