Greenfield is a large village in Highland and Ross counties, Ohio, United States. As of the 2010 census, the population was 4,639. Since the population declined to under 5,000, the Census Bureau may still call it a city, but by Ohio's laws it is technically deemed a village. Since the change from city to village there is no longer a mayor of the town but a city manager; as of 2018, the city manager is Todd Wilkin. Greenfield is most well known because of its rich history, including its community members helping in the underground railroad, new industries, and McClain High School.

Greenfield was named for its rural appearance.

General Duncan McArthur founded the town in 1799. Greenfield has had many innovators, such as Edward Lee McClain who was well known for his detachable horse collar. The American Pad and Textile Company was created by McClain later in life. This company provided job opportunities for Greenfield, and created products such as the life vest used in World War II. His memory will never be forgotten by Greenfield however because he donated a great gift to the town. Edward Lee McClain High School which opened on September 23, 1915, was named after him. People who wished to attend paid a fee of 15 cents for admission. Located in the center of town and serving as a focal point for the town, the school has many sculptures, paintings and murals, making it a well known school in Ohio. It was the first school in Ohio to have an indoor swimming pool, which is still there today, with minor construction revisions. 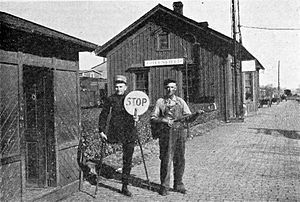 The crossing watchman and the coal shoveler at the Baltimore and Ohio Railroad depot in Greenfield, 1920.

The first African American owned car company was first founded in Greenfield. The Patterson Car Company started as a buggy company but quickly started to produce buses and cars. C.R. Patterson, alongside his friend Lowe, moved to Greenfield where they founded the car company. After Lowe died, the company was left solely to Patterson. The Patterson Car Company provided Greenfield schools buses to conduct routes. Other industries in Greenfield include Ruckers Quarry, which day and night quarried stone such as limestone on a large scale for the Cincinnati market. Another industry was Harps Manufacturing which was most well known for the Never-fail Oil Can, which was originally designed by Eugene Arnott but then perfected by Harp's Manufacturing.

Most of Greenfield's settlers moved from their comfortable homes in the founding states to unfamiliar territory, Ohio, because they were against slavery. In April 1833, the Abolition Society of Paint Valley was founded. Its main effort was to educate and do missionary work in the stance of ending slavery. The Abolition Society of Paint Valley was later disbanded but was quickly re-organized as the Greenfield Antislavery Society. Records become thin due to the large number of citizens helping African Americans to gain freedom. Greenfield played a major part in the ending of slavery. Former slaves passed through the area on their way to Canada during the operation of the Underground Railroad with much help from Greenfield's community members.

Much of Greenfield's early history concentrates on the Travellers' Rest Inn at the eastern end of Jefferson Street. Constructed in 1812, it was the village's first stone building. It also served as its first post office, and was the space for its first doctor's office. Now operated as a museum, the inn is listed on the National Register of Historic Places. The Samuel Smith House and Tannery is also listed on the National Register.

As of today, much of Greenfield's rich history has gone; many storefronts are vacant where prominent businesses once stood. However, the Travelers Rest remains, along with other buildings such as the former post office and the school. In 1988, the 29.5-mile railroad line connecting the city to the national rail network was scheduled to be decommissioned, but Greenfield bought it for $2.4 million and kept it operational in order to retain a transportation outlet for the local manufacturing industry. This also made the city the smallest in the U.S. to own its own rail line.

According to the United States Census Bureau, the city has a total area of 2.06 square miles (5.34 km2), all land.

Greenfield receives an annual average of 38 inches of rain, and averages 25 inches of snow. Both averages are very similar to those of the United States. Greenfield averages 173 sunny days and 128 rainy days. The average high temperature is 84 degrees and the average low is 20.6 degrees.

There were 1,829 households, of which 33.7% had children under the age of 18 living with them, 38.4% were married couples living together, 17.8% had a female householder with no husband present, 6.5% had a male householder with no wife present, and 37.2% were non-families. 32.1% of all households were made up of individuals, and 15% had someone living alone who was 65 years of age or older. The average household size was 2.47 and the average family size was 3.07.

Greenfield has a public library, a branch of the Highland County District Library.

All content from Kiddle encyclopedia articles (including the article images and facts) can be freely used under Attribution-ShareAlike license, unless stated otherwise. Cite this article:
Greenfield, Ohio Facts for Kids. Kiddle Encyclopedia.