Highland County is a county located in the U.S. state of Ohio. As of the 2020 census, the population was 43,317.Its county seat is Hillsboro. The county is named for the topography which is hilly and divides the watersheds of the Little Miami and Scioto Rivers.

The Highland County District Library [1] is the public library system serving Highland County, Ohio. The main library is in Hillsboro, with three branches located in Greenfield, Leesburg, and Lynchburg. The library is a member of the SEO Consortium which allows patrons access to over 6.9 million items owned by member libraries.

There are currently several recreational areas in Highland County. There is Rocky Fork State Park which is located 5 miles east of Hillsboro. It provides opportunities to go camping, fishing, boating, swimming, hunting, putt-putt, and disc golf amongst other activities.

Fort Hill State Memorial is a memorial built by the Hopewell people that is located 10 miles southeast of Hillsboro and is believed to be around 2000 years old.

Highlands Sanctuary is a chain of nature preserves centered in Highland County and owned by an organization of the same name. 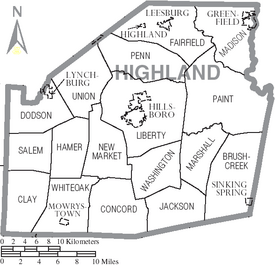 Map of Highland County, Ohio with Municipal and Township Labels

All content from Kiddle encyclopedia articles (including the article images and facts) can be freely used under Attribution-ShareAlike license, unless stated otherwise. Cite this article:
Highland County, Ohio Facts for Kids. Kiddle Encyclopedia.