Kids Encyclopedia Facts
Not to be confused with Clinton, Ohio.

Clinton County is a county located in the U.S. state of Ohio. As of the 2020 census, the population was 42,018. The county seat is Wilmington. The county is named for former U.S. Vice President George Clinton.

Clinton County was formed on February 19, 1810 from sections of Highland County and Warren County. It was named after George Clinton, a soldier, politician, Governor of New York, and Vice President of the United States. According to The Descendants of William Sabin, compiled by Gordon Alan Morris, Thomas J. Prittie, and Dixie Prittie, one of the first Caucasian children born in the county was Mary Stuart Sabin, daughter of Dr. Warren Sabin, c. 1812. Genealogical records also indicate Williston T. Mendenhall was born in Clarksville, Clinton County on 24 November 1811.

The entire county lies within the Little Miami River watershed, with the exception of extreme eastern areas, which are within the Scioto River watershed. Clinton County lies within the till plains physiographic region, and is somewhat flat or gently rolling. The northern two thirds of the county were covered with an ice sheet during the Wisconsinan Stage, while the southern third was covered by ice sheets during the much older Illinoian Stage. Because of such a history with ice, glacial features are readily found on the landscape, such as moraines and kames.

The general elevation of the county is roughly 1,050 feet (320 m) above sea level, and there are few areas in the county that deviate from this more than 200 feet (61 m).

The climate of Clinton County can be classified as humid continental. It is one of the coolest and wettest counties in southern Ohio, although differences between it and other southern Ohio counties are usually very slight. Clinton County averages 42 inches (1,100 mm) of precipitation per year, including 30 inches (760 mm) of snow (Note: 1 inch of snow does not equal one inch of precipitation). Average July high temperatures reach the mid and upper 80s F although temperatures above 90 F are common, while lows are typically in the 60s F. January high temperatures typically reach the low and mid 30s F, while lows generally bottom out in the 10s F, although lows in the single digits and even below 0 F are common.

Interstate 71 crosses the northern third of the county, trending northeast to southwest and connecting Clinton County to Columbus, Ohio and Cincinnati. Clinton County is part of the Cincinnati-Middletown-Wilmington Combined Statistical Area, although there is little true urban activity in the county. U.S. Route 68 is the major north-south route through the county, while U.S. Route 22 runs east-west. Several other state and local highways serve the residents of Clinton County.

Clinton County is home to Cowan Lake State Park, where outdoor recreationalists enjoy fishing, swimming, boating, hiking, bicycling, camping, and wildlife viewing. The northwestern border of Clinton County is formed by Caesar Creek Lake, which is part of Caesar Creek State Park. Fossil hunting is popular here, in addition to similar activities enjoyed at Cowan Lake. Wilmington College in Wilmington has several NCAA Division III athletic programs, whose events can be attended by the public. The city is also the home of the Clinton County Corn Festival. 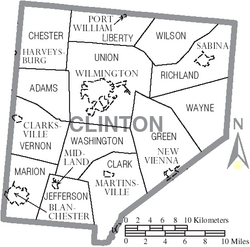 Map of Clinton County, Ohio With Municipal and Township Labels

All content from Kiddle encyclopedia articles (including the article images and facts) can be freely used under Attribution-ShareAlike license, unless stated otherwise. Cite this article:
Clinton County, Ohio Facts for Kids. Kiddle Encyclopedia.