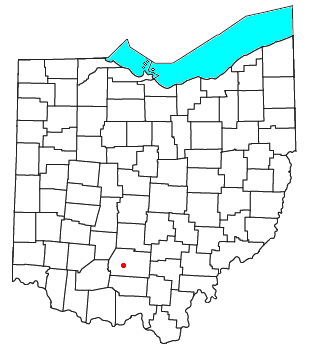 Bourneville is a census-designated place in central Twin Township, Ross County, Ohio, United States. It has a post office with the ZIP code 45617. It lies along U.S. Route 50.

As of 1847, an Indian stone work was located near Bourneville. It was surveyed by Ephraim George Squier and Edwin Hamilton Davis and was featured in their book, Ancient Monuments of the Mississippi Valley, which was published in 1848.

All content from Kiddle encyclopedia articles (including the article images and facts) can be freely used under Attribution-ShareAlike license, unless stated otherwise. Cite this article:
Bourneville, Ohio Facts for Kids. Kiddle Encyclopedia.