Greenup County is a county located in the U.S. state of Kentucky. As of the 2010 census, the population was 36,910. The county was founded in 1803 and named in honor of Christopher Greenup. Its county seat is Greenup.

Greenup County was formed by an act of the General Assembly of Kentucky on December 12, 1803 from Mason County which covered the majority of eastern Kentucky at the time.

Three courthouses have served Greenup County. The first courthouse, built of logs, was replaced by a brick structure in 1811.

Like most eastern Kentucky counties, Greenup County is predominantly made up of rolling hills and valleys. The land in the Ohio River valley is generally flat and mostly populated by industry, commerce and residential development. Beyond this the land gives way to a series of hills and valleys that are representative of the foothills of the Appalachian Mountains and is relatively sparsely inhabited by farmers. Among these hills, popular fishing spots can be found among the Little Sandy River, Greenbo Lake, and Tygarts Creek. Greenup County's land is still predominantly covered by forest with minimal clear cutting of the old forests.

Greenup County's soil has long been supportive of a healthy agriculture and livestock industry. Traditionally, this has meant a sizeable tobacco base and cattle ranching, but in recent years, as traditional agriculture products have come under the dominance of agri-corporations, growth has been seen in non-traditional products such as American Quarter Horses and ostriches. 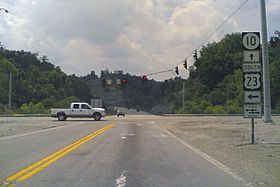 A view of the intersection of U.S. 23, KY 10, & Ohio SR 253 just after crossing the Jesse Stuart Memorial Bridge in Greenup

U.S. Highway 23 is the primary route for travel through Greenup County. It enters Greenup County at the southeastern most point and follows the Ohio River north along the eastern border passing through Russell, Flatwoods, Raceland, Wurtland, Greenup and South Shore. It then exits just west of South Shore crossing the Ohio River via the U.S. Grant Bridge into Portsmouth, Ohio and continuing north towards Columbus, Ohio.

The AA Highway begins at U.S. Highway 23 and connects to U.S. Highway 52 in Ohio via the Jesse Stuart Memorial Bridge. The AA Highway (also known as Route 10) runs west intersecting Route 7 and eventually exiting west into Lewis County. Since its completion in 1995, the AA Highway has allowed Northeastern Kentucky residents to more easily travel to Maysville, Kentucky as well as Northern Kentucky and Cincinnati, Ohio.

The northern terminus of the Industrial Parkway (Kentucky Route 67) ends at U.S. Highway 23 at Wurtland. This highway serves to connect Wurtland and the surrounding towns of Greenup, Flatwoods and the unincorporated area of Argillite to the EastPark industrial park and Interstate 64 in Carter County.

All content from Kiddle encyclopedia articles (including the article images and facts) can be freely used under Attribution-ShareAlike license, unless stated otherwise. Cite this article:
Greenup County, Kentucky Facts for Kids. Kiddle Encyclopedia.