Portsmouth is a city in and the county seat of Scioto County, Ohio, United States. It lies in far southern Ohio, just east of the mouth of the Scioto River at the Ohio River, and across from Kentucky. The population was 20,226 at the 2010 census.

According to historian Charles Augustus Hanna, a Shawnee village was founded at the site of modern-day Portsmouth in late 1758, following the destruction of Lower Shawneetown by floods.

Portsmouth's European-American roots date to the 1790s, when the small town of Alexandria was founded west of Portsmouth's site. Alexandria was flooded numerous times by the Ohio and the Scioto rivers, especially in a massive flood in January and February 1937.

In 1803, Henry Massie spotted a place to move the town away from the flood plains. He began to plot the new city by mapping the streets and distributing the land. Portsmouth was founded in 1803 and was established as a city in 1815. Alexandria soon disappeared.

Portsmouth quickly grew around an industrial base due to its location at the confluence of the Ohio and Scioto rivers; early industrial growth included having meat packing and shipping facilities for Thomas Worthington's Chillicothe farm, located north of Portsmouth on the Scioto River. Portsmouth growth continued with the completion of the Ohio and Erie Canal, which provided access to the Great Lakes, opening up northern markets. The construction of the N&W railyards and the B&O junction at the city also stimulated growth, with railroads soon carrying more freight than the canal. By the end of the 19th century, Portsmouth became one of the most important cities on the Ohio River between Pittsburgh and Cincinnati.

By 1916, Portsmouth was listed as being a major industrial and jobbing center, with it being the fourth-largest shoe manufacturing center in the country and the largest manufacturer of fire and paving bricks in the United States. Wheeling-Pittsburgh Steel (later called Empire-Detroit Steel) employed over one thousand people. There were 100 other manufacturing companies producing goods from furniture to engines.

Industrial and shipping growth greatly benefited Boneyfiddle (a west-end neighborhood in Portsmouth), where grand buildings were constructed with the wealth from the commerce. As time passed, much of the commerce began to move towards Chillicothe Street, which is still today the main thoroughfare of Portsmouth. While Boneyfiddle is receiving new life, it is a shadow of its former self. Another notable part of Portsmouth's history in the 19th century was its importance on the Underground Railroad. Fugitive slaves used this route to continue north to Detroit and into Canada to gain freedom.

The population peaked at just over 42,000 in 1930 (see "Demographics", below), and by the 1950 census, the population had fallen below 40,000. Foreign competition and industrial restructuring resulted in most of the industrial jobs on which Portsmouth's economy was based moving out of the area.

Following these declines, in 1980 when Empire-Detroit Steel-Portsmouth Works suspended local operations after the sale of the steel plant to Armco Steel (now AK Steel). Armco Steel closed the plant because they did not want to replace the obsolete Open Hearth Furnaces with the more efficient basic oxygen steel furnaces. The plant also needed a continuous caster to replace the obsolete soaking pits and blooming mill in 1995. When the steel mill was closed, 1,300 steelworkers were laid off. As of 2010, the city has a population of approximately 20,000. It has shared in the loss of jobs due to unskilled labor outsourcing and population migration to more urban areas.

There were 8,286 households out of which 28.5% had children under the age of 18 living with them, 33.9% were married couples living together, 17.5% had a female householder with no husband present, 5.4% had a male householder with no wife present, and 43.2% were non-families. 35.9% of all households were made up of individuals and 15.5% had someone living alone who was 65 years of age or older. The average household size was 2.28 and the average family size was 2.93.

There were 9,120 households out of which 25.9% had children under the age of 18 living with them, 37.9% were married couples living together, 15.6% had a female householder with no husband present, and 42.8% were non-families. 37.3% of all households were made up of individuals and 17.8% had someone living alone who was 65 years of age or older. The average household size was 2.19 and the average family size was 2.87.

A painting of the confluence of the Ohio and Scioto Rivers, showing the dissected plateau terrain and the Carl D. Perkins Bridge. Artist Herb Roe

Portsmouth is at the confluence of the Ohio, Scioto, and Little Scioto Rivers. Portsmouth is a midway point among four major cities: Charleston, West Virginia, Cincinnati and Columbus, Ohio; and Lexington, Kentucky, each of which are approximately ninety miles away (roughly a two-hour drive). Much of the terrain is quite hilly due to dissected plateau around it. Both rivers have carved valleys and Portsmouth lies next to both the Scioto and Ohio rivers. It is within the ecoregion of the Western Allegheny Plateau. According to the United States Census Bureau, the city has a total area of 11.07 square miles (28.67 km2), of which 10.73 square miles (27.79 km2) is land and 0.34 square miles (0.88 km2) is water. 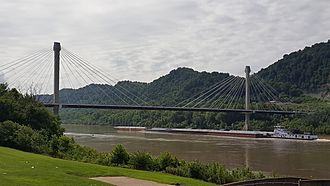 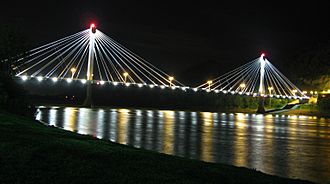 A nightly view of the newly built U.S. Grant Bridge carrying U.S. 23 over the Ohio River.

Portsmouth is served by two major U.S. Routes: 23 and 52. Other significant roads include Ohio State Routes 73, 104, 139, 140, and 335. The nearest Interstate highway is I-64. Interstate 73 is planned to use the newly built Portsmouth bypass en route from North Carolina To Michigan. The I-74 Extension is planned to use US 52 through Portsmouth, running concurrently with I-73 on the eastern side of Portsmouth

Portsmouth is an important location in the Norfolk Southern Railway network. Norfolk Southern operates a railyard and locomotive maintenance facility for its long distance shipping route between the coalfields of West Virginia and points east, to the Great Lakes. Competitor CSX Transportation operates a former Chesapeake & Ohio Railway line just east of the city in Sciotoville, which crosses the Ohio River on the historic Sciotoville Bridge. Amtrak offers passenger service to the Portsmouth area on its Cardinal route between New York City and Chicago. The passenger station is located on CSX Transportation-owned track in South Shore, Kentucky, across the Ohio River from Portsmouth.

Public transportation for Portsmouth and its outlying areas is offered through Access Scioto County (ASC). 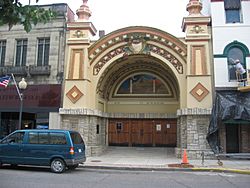 The recently renovated, historic Columbia Music Hall, formerly "The Columbia". The structure was damaged by fire on November 11, 2007, and has since been converted into an outdoor theatre.

Many historical buildings in Portsmouth have been demolished because of poor upkeep, other city development, or the completion of new buildings that replaced the landmarks. Landmarks that have been demolished include the old Norfolk & Western rail depot, churches dating back to the early 20th century, houses dating to the 1850s, Grant Middle School, and the old Portsmouth High School and various elementary schools.

Many buildings survive from the early 19th century. Old churches are among the reminders of Portsmouth's past and identity. The Columbia Theater was given a major facelift after it was damaged by fire. Other noted historic buildings include the old monastery, which can be seen for miles, and Spartan Stadium, as well as numerous buildings in the Boneyfiddle Historic District, which is listed on the National Register of Historic Places. In 1982, students from Miami University conducted research on several of Portsmouth's most important historic buildings. This work resulted in an exhibition at the Miami University Art Museum and a book entitled Portsmouth: Architecture in an Ohio River Town. The Portsmouth Public Library is the city's library, founded in 1879. It has branch libraries throughout Scioto County. The Southern Ohio Museum, founded in 1979, has more than sixty exhibits on display including artwork by Clarence Holbrook Carter and Jesse Stuart, China dolls, Native American artifacts, and works by local artists.

The Indian Head Rock is an eight-ton sandstone boulder which until recently resided in the bottom of the Ohio River. The removal of the rock, has led the states of Kentucky and Ohio into a legislative battle to determine its ownership and disposition. The rock has been returned to the state of Kentucky.

Although developed on higher ground, the city has been subject to seasonal flooding. The city had extensive flooding in 1884, 1913, and 1937. After the flood of 1937, the U.S. Army Corps of Engineers constructed a floodwall protecting the city, which prevented two major floods in 1964 and 1997.

In 1992, the city of Portsmouth began honoring some of the many accomplishments of its area natives by placing a star on the riverside of the floodwall. This is known as the Portsmouth Wall of Fame and was instituted by then-mayor Frank Gerlach. Some of the honorees include Don Gullett, Al Oliver, and former United States Vice-President Dan Quayle, who was not a Portsmouth native.

In 1992 a nonprofit group headed by Dr. Louis R. Chaboudy was formed to investigate developing a mural-based tourist attraction on the floodwall. In the spring of 1993, mural artist Robert Dafford was commissioned and began painting murals of Portsmouth's history. He hired local art student Herb Roe as an assistant. Roe subsequently apprenticed to and worked for Dafford for 15 years. The project eventually spanned sixty 20 feet (6.1 m) tall consecutive Portsmouth murals, stretching for over 2,000 feet (610 m). Subjects covered by the murals span the history of the area from the ancient mound building Adena and Hopewell cultures to modern sporting events and notable natives.

The original mural project was finished in the fall of 2003. Since then several additional panels have been added, including murals honoring Portsmouth's baseball heroes in 2006; and the Tour of the Scioto River Valley (TOSRV), a bicycle tour between Columbus and Portsmouth in 2007.

Portsmouth had a series of semi-pro football teams in the 1920s and 1930s, the most notable being the Portsmouth Shoe-Steels, whose roster included player-coach Jim Thorpe. From 1929 to 1933, the city was home to the Portsmouth Spartans, which joined the National Football League in 1930. The Spartans competed in the first professional football night game, against the Brooklyn Dodgers in 1930. Despite their success, the team could not survive in the NFL's second-smallest city during the Great Depression; it was sold and moved to Detroit in 1934, where it became the Detroit Lions.

In the late 20th century, the Portsmouth Explorers were one of the original teams in the Frontier League, a non-affiliated minor league baseball organization. The Explorers played in the league's first three seasons, from 1993 to 1995. In 1938, Portsmouth was also the home of the Portsmouth Red Birds, a minor league team owned by the St. Louis Cardinals.

Portsmouth is near the dividing line for several television markets, including Columbus, Cincinnati, and Huntington-Charleston. There are two local television stations including WTZP, an America One affiliate, and WQCW, a CW affiliate. Portsmouth is also served by WPBO, a PBS affiliate. Programs airing on WPBO are broadcast by WOSU in Columbus. Local radio stations WIOI, WNXT, WNKE, WZZZ, and WOSP-FM serve the radio listeners in the city. Portsmouth is also served by three newspapers. The Portsmouth Daily Times is the city's only daily newspaper. The Community Common is a free biweekly newspaper and the Scioto Voice is a weekly newspaper, which is mailed to subscribers. The University Chronicle is the student-led newspaper at Shawnee State University.

All content from Kiddle encyclopedia articles (including the article images and facts) can be freely used under Attribution-ShareAlike license, unless stated otherwise. Cite this article:
Portsmouth, Ohio Facts for Kids. Kiddle Encyclopedia.