Lawrence County is the southernmost county located in the U.S. state of Ohio. As of the 2020 census, the population was 58,240. Its county seat is Ironton. The county was created in 1815 and later organized in 1817. It is named for James Lawrence, the naval officer famous for the line "do not give up the ship". Lawrence County is part of the Huntington–Ashland metropolitan area.

The earliest settlers, Luke Kelly, his family and May Keyser, settled at Hanging Rock, along the Ohio River in 1796. In 1851 the county seat was moved from Burlington to Ironton. A new court House was built at that time but it burned in 1857. The present Lawrence County Courthouse was built in 1908.

When first settled, Lawrence County was rich in natural resources such as iron, timber, coal, natural gas, oil, and salt. By the beginning of the twentieth century, many of these had been depleted.

As of the 2010 United States Census, there were 62,450 people, 24,974 households, and 17,405 families living in the county. The population density was 137.7 inhabitants per square mile (53.2/km2). There were 27,603 housing units at an average density of 60.9 per square mile (23.5/km2). The racial makeup of the county was 95.9% white, 2.0% black or African American, 0.4% Asian, 0.2% American Indian, 0.2% from other races, and 1.4% from two or more races. Those of Hispanic or Latino origin made up 0.7% of the population. In terms of ancestry, 18.0% were American, 15.4% were German, 12.9% were Irish, and 10.8% were English. In Lawrence County, less than 1% of people who self-identify as "Irish" are Catholic. Scholars believe this is part of a trend in which people are vaguely aware that at least some of their ancestors come from Ireland, but that population is primarily of "Scots-Irish" or "Ulster Scots" ancestry, and those identifying as "Irish" are simply unaware of the distinction. Those citing "American" ancestry in Lawrence County are of overwhelmingly English extraction, most English Americans identify simply as American because their ancestors have been in North America for centuries—in some cases since the 1600s. 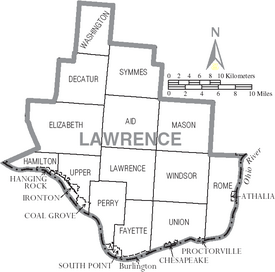 Map of Lawrence County, Ohio with Municipal and Township Labels

All content from Kiddle encyclopedia articles (including the article images and facts) can be freely used under Attribution-ShareAlike license, unless stated otherwise. Cite this article:
Lawrence County, Ohio Facts for Kids. Kiddle Encyclopedia.