Ironton is a city in and the county seat of Lawrence County, Ohio, United States. Located in southernmost Ohio along the Ohio River 20 miles (32 km) northwest of Huntington, West Virginia, the city includes the Downtown Ironton Historic District.

Ironton is a contraction of "iron town." The city has a long history with the iron industry. It also had one of the first professional football teams. 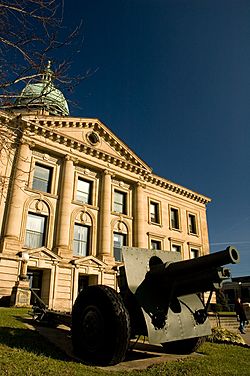 Ironton was founded in 1849 by John Campbell, a prominent pig iron manufacturer in the area. Interested in expanding his foundry business, and due to the area's rich iron-ore content (particularly in the hills to the north), he became interested in the lands surrounding what would later become the city of Ironton.

Between 1850 and 1890, Ironton was one of the foremost producers of iron in the world. England, France, and Russia all purchased iron for warships from here due to the quality. Iron produced here was used for the USS Monitor, the United States' first ironclad ship. More than ninety furnaces were operating at the peak of production in the late 19th century. Owners and managers who gained wealth from the pig-iron industry constructed many opulent residences in the city.

The iron industry generated revenues that were invested in new industries, such as soap and nail production. The Detroit, Toledo and Ironton Railroad was constructed through two states, carrying iron to Henry Ford's automaking plants in Michigan. The city had a street railway, the Ironton Petersburg Street Railway, four daily newspapers and a few foreign-language publications.

With its location on the Ohio River, Ironton became a destination on the Underground Railroad for refugee slaves seeking freedom in the North. John Campbell and some other city leaders sheltered slaves in their homes during their journeys.

During the American Civil War, local military regiments were mustered, quartered, and trained at Camp Ironton, a military post located at the county fairgrounds. Among them was the 91st Ohio Infantry, which was organized at Camp Ironton on August 26, 1862.

The downfall of Ironton came as the market for iron changed. The quality of the iron that had once made Ironton one of the leading producers of pig iron was no longer considered as desirable. Also, the nation was making the transition from a demand for iron to steel. After a nationwide economic recession in the late 19th century, Ironton was no longer growing.

The Norfolk and Western Railway built a new railroad station downtown in 1906, and it continued in operation into the mid-20th century. Two major floods (1917, 1937) caused extensive damage to the city and its industries. The second flood came during the Great Depression; together with the shift in the iron industry, it devastated the city. The iron industry declined, affecting other industries as well. As the iron industries closed, Ironton had little with which to replace them.

An industrial city, Ironton worked to attract other heavy industry to the region. Companies such as Allied Signal and Alpha Portland Cement did build in town. The region has had difficulty creating an alternate economy. By 2004, both Alpha Portland Cement and Allied Signal were gone, and Ironton had shrunk by nearly 30% from its peak population in 1950. (See US Census table below.)

Ironton had one of the first professional football teams in the United States, called the Ironton Tanks. The team was organized in 1919 and played through 1930. It earned a record of 85 wins, 19 losses, 14 ties, including an undefeated season in 1922, a state championship in 1926, and dual victories in 1930 over National Football League (NFL) powerhouses the Chicago Bears and New York Giants. The football field previously used by the Tanks is now home to the Ironton High School Football team, the Ironton Fighting Tigers.

The Tanks began what is now the National Football League's Thanksgiving Day Game tradition of the Detroit Lions. The Tanks played a game in 1920 the day after Thanksgiving with the Lombards, a crosstown rival, winning 26-0. In 1922, they played and defeated the Huntington Boosters 12-0 on Thanksgiving Day, Nov 30. The Tanks continued playing on this national holiday each year thru 1930, which was the Tanks final season. Several Tank players (including Glenn Presnell) continued their football careers by joining the nearby Portsmouth Spartans, who continued the annual tradition until their demise after the 1933 season.

The Spartans' assets were acquired by businessman G.A. Richards and moved to Detroit, where they were renamed the Lions. Asked by Richards about ways to improve ticket sales, the players replied that they always got a good turnout on Thanksgiving Day. He promptly scheduled the first Thanksgiving Day game in Detroit.

Ironton is located within the northern limits of a humid subtropical climate (Koppen Cfa) which is typical of southern Ohio and northern Kentucky. The region experiences four distinct seasons. Winters are cool to cold with mild periods and summers are generally hot and humid, with significant precipitation year round. Ironton is largely transitional in its plant life, sharing traditionally northern trees like the blue spruce along with Magnolia and the occasional Needle Palm from the Upland South.

Ironton has a public library, a branch of Briggs Lawrence County Public Library.

All content from Kiddle encyclopedia articles (including the article images and facts) can be freely used under Attribution-ShareAlike license, unless stated otherwise. Cite this article:
Ironton, Ohio Facts for Kids. Kiddle Encyclopedia.