Kids Encyclopedia Facts
Not to be confused with the suburb of Worthington Hills near Louisville, Kentucky. For the city formerly known as Worthington, Ky, see Island, Kentucky.

Worthington is a home rule-class city on the south bank of the Ohio River in Greenup County, Kentucky, in the United States. The population was 1,609 as of the 2010 U.S. census.

Worthington is a part of the Huntington-Ashland-Ironton metropolitan area. As of the 2010 census, the MSA had a population of 287,702.

The site of the present city was once owned by Abraham Buford, who sold the land to the Means and Russell Iron Company. This company sold the land to W.J. Wortington, who was William O. Bradley's lieutenant governor from 1895 to 1899. After his death, the property was given to his daughters, who founded the present town and named it for their father.

Worthington was incorporated as a city by the Kentucky General Assembly on February 5, 1920.

There were 663 households out of which 31.5% had children under the age of 18 living with them, 62.9% were married couples living together, 12.1% had a female householder with no husband present, and 21.6% were non-families. 19.6% of all households were made up of individuals and 10.9% had someone living alone who was 65 years of age or older. The average household size was 2.52 and the average family size was 2.86.

Located in Worthington, and named for nearby Ashland, the Ashland Regional Airport was once used extensively by the oil manufacturing company Ashland Inc. before the company's corporate headquarters was moved from Russell to Covington. Currently, the airport serves local charter and private aircraft. Recently, community events, such as car and air shows, have also taken place at the airport. 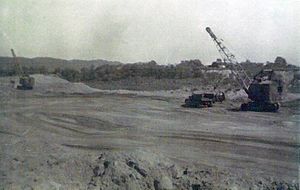 The current Ohio River backwater called the Gravel Pit was a sand and pea gravel quarry from the 1930s until the construction of the Greenup Lock and Dam in 1962.

All content from Kiddle encyclopedia articles (including the article images and facts) can be freely used under Attribution-ShareAlike license, unless stated otherwise. Cite this article:
Worthington, Kentucky Facts for Kids. Kiddle Encyclopedia.