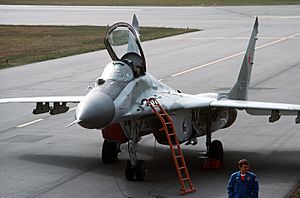 Mikoyan is a Russian company that designs fighter airplanes. The company was first formed in December 1939 as a design office called Mikoyan-Gurevich or MiG, this was because its designers were Artem Mikoyan and Mikhail Gurevich. Mikoyan will join other Russian airplane companies in a new company called United Aircraft Corporation.

In 1939 Russia was part of the Soviet Union and was communist. In the Soviet communist system there were two types of airplane companies, companies that designed aircraft known as design offices or OKB, and companies that made airplanes called zavods. Artom Mikoyan and Mikhail Gurevich had been designers in another design office helping a designer called Nikolai Polikarpov. One airplane design that Artem Mikoyan and Mikhail Gurevich worked on at Polikarpov was called the I-200. When Nikolai Polikarpov lost the trust of the Soviet leader Stalin, Artem Mikoyan and Mikhail Gurevich were given the I-200 design to finish. This airplane was given a new name and was called the Mikoyan-Gurevich MiG-1. As it was being made, ways to make the MiG-1 into a better airplane were found and airplanes with these changes became known as the MiG-3 and later the MiG-7. However even with changes the MiG fighter airplanes were not as good as the fighter airplanes designed by the design offices of Lavochkin or Yakovlev. 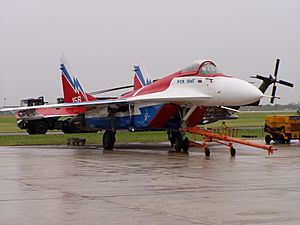 Mikoyan has designed the following airplanes:

All content from Kiddle encyclopedia articles (including the article images and facts) can be freely used under Attribution-ShareAlike license, unless stated otherwise. Cite this article:
Mikoyan Facts for Kids. Kiddle Encyclopedia.