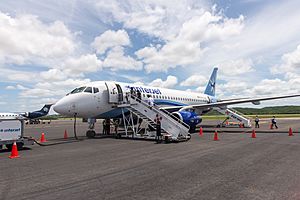 Sukhoi is a company(JSC) Russia’s major aircraft holding company, employing more than 29,000 people. Among the holding’s members are leading Russian design bureaus and aircraft production plants. The Company supports a complete cycle of work in aircraft engineering: from frontend engineering to comprehensive aftersales support. The holding's products, such as Su- marque combat aircraft, are state-of-the-art weapons systems in the global market, which form the backbone of the frontline aviation of Russia and tactical air forces of many other countries. Sukhoi is Russia's major manufacturer of export aircraft, placed 3rd in the world in terms of the numbers of modern fighters produced. The Company is currently implementing promising programmes in the field of military and civil aircraft engineering. Sukhoi has made some of the world's most innovative aircraft, such as the Su-37 Super Flanker. Most of Sukhoi's shareholdings belong in other countries than Russia.

The United States has bought aircraft from Sukhoi for aggressive training operations. However, Sukhoi sold aircraft to Iran, and thus the United States banned Sukhoi from ever doing business with them again.

The origin of Joint-Stock Company Sukhoi Design Bureau dates back to team No 4 of CAHI's AGOS aviation, flying boat aviation and aircraft prototype engineering facility, the team having been taken over by P.O. Sukhoi in October 1930. It was at that point that the team of the future Design Bureau started to take shape.

The next nine years saw the team produce: The experimental fighters I-3, I-14, DIP; The record-breaking RD aircraft used by the crews of V.P. Chkalov and M.M. Gromov to perform a number of trailblazing long-distance flights, and by the crew of M.M. Gromov to set an absolute world record in direct flight range, 10,148 km, the distance having been covered in 62 hours 17 min; The long-range DB-2 bomber, an upgraded version of which, called Rodina, was used by the all-female crew under V.S. Grizodubova to perform a non-stop flight from Moscow to the Far East; The multi-role BB-1 aircraft (after 1940 known as the Su-2), which was the first Sukhoi series aircraft to be produced in large numbers (910 planes) and in its short-range bomber and artillery recon/spotter versions took an active part in the

Great Patriotic War. To set up production of the BB-1, the government resolution of 29th July 1939 appointed P.O. Sukhoi Chief Designer. He, together with the team of the Design Bureau, which had been given a standalone status, was relocated to production aircraft plant No 135 in Kharkov.

The subsequent efforts of the team are focused on development of: versions of the Su-2 aircraft; The prototype armoured Su-6 attack aircraft in single-seat and two-seat versions, for which P.O. Sukhoi was awarded Stalin's Prize of the 1st Level in 1943; The prototype cannon-armed Su-1 (Su-3) fighter; The prototype long-range two-seat armoured Su-8 attack aircraft; The experimental Su-5 and Su-7 with combined powerplants. Beginning in 1945, the Design Bureau was engaged in development and building of: The Su-9, Su-11, Su-15, Su-17 jet fighters (the first ones under this system of naming); The Su-10 jet bomber; The twin-engine Su-12 piston recon/spotter Su-12. The Tu-2 bomber platform was used to develop, and put into production, the trainer bomber UTB-2; it addition, design work was carried out on passenger and troop-carrying aircraft, the Su-14 jet attack aircraft and a number of other aeroplanes.

The five post-war years saw the Design Bureau develop and introduce the nation's first: booster aircraft control system; landing braking parachute; catapult ejection seat with telescopic trolley; jettisonable nose with pressurized cockpit. In November 1949, a government's resolution scrapped the Design Bureau, not to be resurrected till May 1953, when it was set up with new production facilities. The Design Bureau got a new lease on life with the advent of supersonic jet aviation. That is why the design team's major projects at the initial stage were the supersonic fighters S-1 and T-3. The S-1 provided a platform for the family of fighter-bombers, the Su-7 and Su-17, and more than 20 versions of them, with the Su-17 becoming the USSR's first aeroplane with a variable sweep wing. The experimental T-3 became the platform for the first Soviet target interception air launched missile system Su-9-51 and the subsequent Su-11-8M and Su-15-98(M) systems. In the '60s, the list of the equipment being developed by the Design Bureau became longer. In 1962, a project was launched to produce a long-range strike/recon aircraft, the T-4, the maiden flight of the prototype taking place on 22nd August 1972. This aircraft featured this country's first fly-by-wire system and automatic throttle control, with a weld-fabricated airframe of titanium and heavy-duty steel.

The year 1969 saw the maiden flight of the frontline Su-24 bomber with variable sweep wing, the first Soviet all-weather strike aircraft. The Su-24 was produced in several versions. It is currently in the inventory of the Air Forces of the RF and a number of other countries.

The year 1975 saw the maiden flight of the armoured Su-25 attack aircraft designed for destruction of battlefield targets. The Su-25 was the nation's first mass-produced jet attack aircraft; it has several versions and is currently a key asset of RF combat aviation.

In order to implement design solutions and master new materials and engineering processes, an experimental prototype aircraft, the Su-47 (maiden flight 1997), was developed.

The aircraft-building experience gained by the Design Bureau's team over many decades made it possible to produce a family of aerobatic aeroplanes, the Su-26, Su-29, and Su-31. With these machines, the national aerobatics team of the USSR and RF have won a total of 330 medals (156 gold medals) at the World and European Championships.

At the beginning of the '90s, the Design Bureau initiated work on civil projects. The year 2001 saw the first flights of the utility transport aircraft Su-80GP and the agricultural Su-38L plane.

In different periods, the team was headed by P.O. Sukhoi, Ye.A. Ivanov, M.P. Simonov, and since 1999, the Chief Executive Officer has been M.A. Pogosyan. Over many decades, the Design Bureau's team has developed about 100 aircraft types and versions, with 60+ types put into production, giving a total of 10,000 production aeroplanes. Over 2,000 planes have been exported, to 30 countries. Su- planes have been used to establish over 50 world records.

All content from Kiddle encyclopedia articles (including the article images and facts) can be freely used under Attribution-ShareAlike license, unless stated otherwise. Cite this article:
Sukhoi Facts for Kids. Kiddle Encyclopedia.