The American Quarter Horse, or Quarter Horse, is an American breed of horse that excels at sprinting short distances. Its name is derived from its ability to outrun other horse breeds in races of a quarter mile or less; some have been clocked at speeds up to 55 mph (88.5 km/h). The development of the Quarter Horse traces to the 1600s.

In the 1600s on the Eastern seaboard of what today is the United States began to breed imported English Thoroughbred horses with assorted "native" horses.

One of the most famous of these early imports was Janus, a Thoroughbred who was the grandson of the Godolphin Arabian. He was foaled in 1746, and imported to colonial Virginia in 1756. The influence of Thoroughbreds like Janus contributed genes crucial to the development of the colonial "Quarter Horse". The resulting horse was small, hardy, quick, and was used as a work horse during the week and a race horse on the weekends.

As flat racing became popular with the colonists, the Quarter Horse gained even more popularity as a sprinter over courses that, by necessity, were shorter than the classic racecourses of England. These courses were often no more than a straight stretch of road or flat piece of open land. When competing against a Thoroughbred, local sprinters often won. As the Thoroughbred breed became established in America, many colonial Quarter Horses were included in the original American stud books. This began a long association between the Thoroughbred breed and what would later become officially known as the "Quarter Horse", named after the 1⁄4 mile (0.40 km) race distance at which it excelled. Some Quarter Horses have been clocked at up to 55 mph.

In the 19th century, pioneers heading West needed a hardy, willing horse. On the Great Plains, settlers encountered horses that descended from the Spanish stock Hernán Cortés and other Conquistadors had introduced into the viceroyalty of New Spain, which today includes the Southwestern United States and Mexico.

The horses of the West included herds of feral animals known as Mustangs, as well as horses domesticated by Native Americans, including the Comanche, Shoshoni and Nez Perce tribes. As the colonial Quarter Horse was crossed with these western horses, the pioneers found that the new crossbred had innate "cow sense", a natural instinct for working with cattle, making it popular with cattlemen on ranches.

Development as a distinct breed 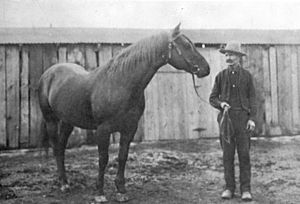 A photograph of Peter McCue, taken in Oklahoma around 1905

Early foundation sires of Quarter horse type included Steel Dust, foaled 1843; Shiloh (or Old Shiloh), foaled 1844; Old Cold Deck (1862); Lock's Rondo, one of many "Rondo" horses, foaled in 1880; Old Billy—again, one of many "Billy" horses—foaled circa 1880; Traveler, a stallion of unknown breeding, known to have been in Texas by 1889; and Peter McCue, foaled 1895, registered as a Thoroughbred but of disputed pedigree. Another early foundation sire for the breed was Copperbottom, foaled in 1828, who tracks his lineage through the Byerley Turk, a foundation sire of the Thoroughbred horse breed.

The main duty of the ranch horse in the American West was working cattle. Even after the invention of the automobile, horses were still irreplaceable for handling livestock on the range. Thus, major Texas cattle ranches, such as the King Ranch, the 6666 (Four Sixes) Ranch, and the Waggoner Ranch played a significant role in the development of the modern Quarter Horse. The skills required by cowboys and their horses became the foundation of the rodeo, a contest which began with informal competition between cowboys and expanded to become a major competitive event throughout the west. To this day, the Quarter Horse dominates in events that require speed as well as the ability to handle cattle.

In 1940, the American Quarter Horse Association (AQHA) was formed by a group of horsemen and ranchers from the Southwestern United States dedicated to preserving the pedigrees of their ranch horses. After winning the 1941 Fort Worth Exposition and Fat Stock Show grand champion stallion, the horse honored with the first registration number, P-1, was Wimpy, a descendant of the King Ranch foundation sire Old Sorrel. Other sires alive at the founding of the AQHA were given the earliest registration numbers Joe Reed P-3, Chief P-5, Oklahoma Star P-6, Cowboy P-12, and Waggoner's Rainy Day P-13. The Thoroughbred race horse Three Bars, alive in the early years of the AQHA, is recognized by the American Quarter Horse Hall of Fame as one of the significant foundation sires for the Quarter Horse breed. Other significant Thoroughbred sires seen in early AQHA pedigrees include Rocket Bar, Top Deck and Depth Charge. 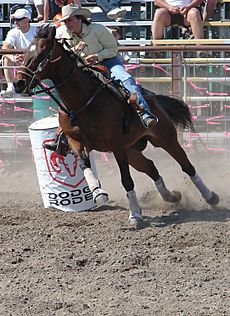 The Quarter Horse is well-suited for the western disciplines.

The breed is not only well-suited for western riding and cattle work. Many race tracks offer Quarter Horses a wide assortment of pari-mutuel horse racing with earnings in the millions. Quarter Horses have also been trained to compete in dressage and show jumping. They are also used for recreational trail riding and in mounted police units. 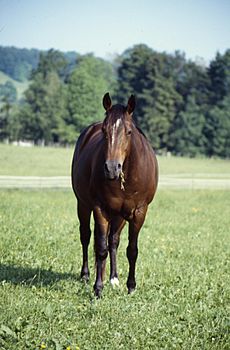 The Quarter Horse has a small, short, refined head with a straight profile, and a strong, well-muscled body, featuring a broad chest and powerful, rounded hindquarters. They usually stand between 14 and 16 hands (56 and 64 inches, 142 and 163 cm) high, although some Halter-type and English hunter-type horses may grow as tall as 17 hands (68 inches, 173 cm).

There are two main body types: the stock type and the hunter or racing type. The stock horse type is shorter, more compact, stocky and well-muscled, yet agile. The racing and hunter type Quarter Horses are somewhat taller and smoother muscled than the stock type, more closely resembling the Thoroughbred.

Quarter Horses come in nearly all colors. The most common color is sorrel, a brownish red, part of the color group called chestnut by most other breed registries. Other recognized colors include bay, black, brown, buckskin, palomino, gray, dun, red dun, grullo (also occasionally referred to as blue dun), red roan, blue roan, bay roan, perlino, cremello, and white. In the past, spotted color patterns were excluded, but now with the advent of DNA testing to verify parentage, the registry accepts all colors as long as both parents are registered.

A stock horse is a horse of a type that is well suited for working with livestock, particularly cattle. Reining and cutting horses are smaller in stature, with quick, agile movements and very powerful hindquarters. Western pleasure show horses are often slightly taller, with slower movements, smoother gaits, and a somewhat more level topline – though still featuring the powerful hindquarters characteristic of the Quarter Horse.

Horses shown in-hand in Halter competition are larger yet, with a very heavily muscled appearance, while retaining small heads with wide jowls and refined muzzles. There is controversy amongst owners, breeder and veterinarians regarding the health effects of the extreme muscle mass that is currently fashionable in the specialized halter horse, which typically is 15.2 to 16 hands (62 to 64 inches, 157 to 163 cm) and weighs in at over 1,200 pounds (540 kg) when fitted for halter competition. Not only are there concerns about the weight to frame ratio on the horse's skeletal system, but the massive build is also linked to hyperkalemic periodic paralysis (HYPP) in descendants of the stallion Impressive (see Genetic diseases below). 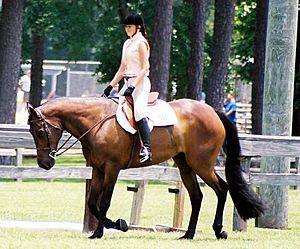 A Quarter Horse warming up for hunt seat competition

Quarter Horse race horses are bred to sprint short distances ranging from 220 to 870 yards. Thus, they have long legs and are leaner than their stock type counterparts, but are still characterized by muscular hindquarters and powerful legs. Quarter Horses race primarily against other Quarter Horses, and their sprinting ability has earned them the nickname, "the world's fastest athlete." The show hunter type is slimmer, even more closely resembling a Thoroughbred, usually reflecting a higher percentage of appendix breeding. They are shown in hunter/jumper classes at both breed shows and in open USEF-rated horse show competition.

There are several genetic diseases of concern to Quarter Horse breeders:

All content from Kiddle encyclopedia articles (including the article images and facts) can be freely used under Attribution-ShareAlike license, unless stated otherwise. Cite this article:
American Quarter Horse Facts for Kids. Kiddle Encyclopedia.