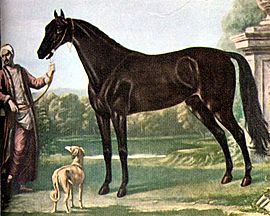 The Byerley Turk by John Wootton

The Byerley Turk (c. 1680 – c. 1706), also spelled Byerly Turk, was the earliest of three stallions that were the founders of the modern Thoroughbred horse racing bloodstock (the other two are the Godolphin Arabian and the Darley Arabian).

The biographical details of the stallion are the subject of much speculation. The entry in the General Stud Book simply states: "BYERLY TURK, was Captain Byerly's [sic] charger in Ireland, in King William's wars (1689, &c.)." As for his earlier history, the most popular theory is that the horse was captured at the Battle of Buda (1686) along with the Lister Turk, who was brought to England by the Duke of Berwick. Other sources speculate he was one of three Turkish stallions captured at the Battle of Vienna. It is even possible he was bred in England from previously imported stock. He was definitely the war horse of Captain Robert Byerley, who was dispatched to Ireland in 1689 during King William's War and saw further military service in the Battle of the Boyne. According to early records, Captain Byerley was nearly captured while reconnoitering the enemy, "owing his safety to the superior speed of his horse".

As a general rule, the spelling of a name registered with the Jockey Club is considered definitive, even if it is an obvious error. However, the original edition of the General Stud Book was compiled nearly a century after the fact (in 1791) and contains several errors that have been subsequently corrected. Most sources consider the correct spelling of the horse's name to follow the correct spelling of the owner's name, Byerley.

The Byerley Turk was a dark brown or black horse of unknown breeding, but described in historic accounts as an Arabian. At the time, Turkish horses were described as descended from "those of Arabia or Persia", but stated that they were longer in the body and of a larger size. He was described as a horse of elegance, courage and speed. Many of his offspring were also noted to have been either bay or black.

He did not cover many well-bred mares, but his most significant sons include: 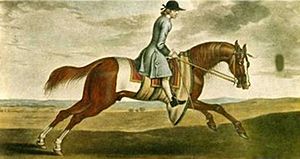 Partner, grandson of the Byerley Turk, grandsire of Herod

The Byerley Turk also sired several highly influential daughters, most of whose names do not survive. They are generally classified by the female family that they belong to: 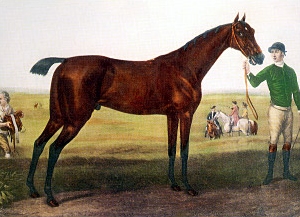 The Byerley sire line persisted by producing a major sire every few generations, whose sons would create branches of their own. Most of these branches have died out over the course of time. The line of descent to the present day is as follows: 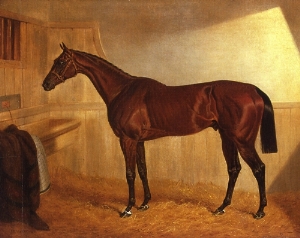 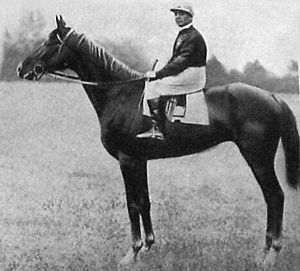 Thus the continuation of the Byerley Turk Thoroughbred sire line via Herod now largely depends on the descendants of Ahonoora, several of whom are at stud in Europe. Also, a direct male descendant by the name of Gem Twist, a three-time American Grand Prix Association champion Thoroughbred show jumper, had two clones produced that have successfully produced offspring as recently as 2012. The clones and any offspring of them are not considered Thoroughbreds however, as the breed requires procreation by natural means.

Note that focusing on the sire line underestimates the ongoing influence of the Byerley Turk: detailed pedigree analysis shows that he has a higher percentage of blood in the modern Thoroughbred than either of his fellow foundation sires through other lines of descent. Furthermore, the influence of the Byerley Turk has been felt through other horse breeds through his direct male descendants Diomed (American Quarter Horse and Standardbred), Denmark (American Saddlebred), and Justin Morgan (Morgan horse). In fact, Denmark and Justin Morgan are key foundation sires for their respective breeds. Also, there are two key leading sires of the American Quarter Horse breed (Two Eyed Jack and Joe Hancock) that trace their direct male lineage through Peter McCue, a key foundation sire for that breed through Diomed. Therefore, the Byerley Turk overall sire line lives on today more prominently through the American Quarter Horse, American Saddlebred and Morgan horse than the Thoroughbred.

All content from Kiddle encyclopedia articles (including the article images and facts) can be freely used under Attribution-ShareAlike license, unless stated otherwise. Cite this article:
Byerley Turk Facts for Kids. Kiddle Encyclopedia.