Eclipse (1 April 1764 – 26 February 1789) was an undefeated 18th-century British Thoroughbred racehorse who won 18 races, including 11 King's Plates. After retiring from racing he became a very successful sire and today appears in the pedigree of most modern Thoroughbreds.

Eclipse was foaled during and named after the solar eclipse of 1 April 1764, at the Cranbourne Lodge stud of his breeder, Prince William Augustus, Duke of Cumberland. It was at this stud that his sire, the Jockey Club Plate winner Marske (by Squirt from The Ruby Mare) stood. His dam, Spilletta (foaled 1749), was by Regulus, who was by the Godolphin Arabian. Eclipse's male-line great-grandsire was Bartlett's Childers, and his male-line great-great-grandsire was Darley Arabian. Eclipse was a brother to the successful broodmare Proserpine. They were inbred to Snake in the fourth generation (4m x 4f) of their pedigree. After the death of Prince William in 1765, Eclipse was sold for 75 guineas to a sheep dealer from Smithfield, William Wildman.

Eclipse was a bright chestnut with a narrow blaze running down his face. He had a white stocking on his right hind leg. Eclipse was a big horse for his time, just over 16 hands (64 inches, 163 cm), and was an inch higher at the rump than at the withers. He was strong, sound and fast. He was sometimes criticized for having a large, unattractive head. His difficult temperament was well documented, and might have led to him being gelded. Instead he was turned over to a rough-rider, who worked him hard all day, and at night as well on poaching expeditions if the stories are to be believed. This treatment, rather than souring his disposition, settled Eclipse enough to allow him to be raced, although his jockeys never attempted to hold him.

Prior to Eclipse's first start at the age of five, a trial was arranged at Epsom (although the location has also been given as Mickleham). Bookmakers, trying to verify if rumours about the horse were true, showed up but were too late — the trial had already been run. On their way home though, they encountered an old woman who told them she had seen a horse with a white leg being chased by another, whom she did not think would catch the horse with the white leg, even if he pursued him to the end of the world. Accordingly, when Eclipse started in his first race on May 3 1769, a £50 Plate for horses who had never won, he was 4/1 on favourite. The race consisted of three heats of four miles each. Eclipse won easily.

After his second victory in a race in May 1769, Dennis O'Kelly purchased Eclipse in two stages. (50 percent in June 1769 for 650 guineas, 50 percent in April 1770 for 1,100 guineas). Supposedly, at this time O'Kelly used the famous phrase "Eclipse first and the rest nowhere", before making his bets for this race, although some sources have him saying this for the second heat of the horse's debut. At that time, a horse that was more than 240 yards behind the lead was said to be nowhere. His jockey was John Oakley, supposedly the only jockey who could handle Eclipse's temperamental manner and running style of holding his nose very close to the ground. Eclipse won the race and covered O'Kelly's bet.

His toughest challenge was a match race versus the highly regarded Bucephalus in April 1770. Bucephalus was game, but Eclipse was the easy winner. In August, he took on top class horses Tortoise and Bellario in the Great Subscription Purse at York, but at odds of 20/1 on, routed both of them, being over a furlong in front after two miles, and winning in a canter.

Eclipse won 18 races, including 11 King's Plates, supposedly without ever being fully extended and proving far superior to all competition. During his racing career, Eclipse ran over 63 miles and walked 1,400 miles to race meetings across England.

He is attested to have covered 83 feet per second at top speed, and covered 25 feet in a single stride.

In ten of the King's Plates, Eclipse carried 12 st, or 168 pounds, the highest weight (by one pound) that was carried by a winner in England up to 1840.

In 1771, Eclipse was retired to stud after a racing career of about 17 months due to lack of competition as nobody was betting on rival horses. Initially he stood at O'Kelly's Clay Hill Stud, near Epsom (Surrey), for a fee of 10 guineas which rose rapidly to 25 and then to 50 guineas a mare. During 1788, he was relocated to Cannons Stud, Edgware (Middlesex).

Eclipse was never the leading sire in Great Britain and Ireland, although he finished in second place 11 times, usually behind Herod. A book published in 1970 stated that the Royal Veterinary College had determined that nearly 80% of Thoroughbred racehorses had Eclipse in their pedigree. That percentage has naturally increased with time and the inevitable inbreeding in the Thoroughbred population. More recently it has been estimated that Eclipse is not only somewhere in the pedigree, but a tail-male ancestor of "95pc of contemporary thoroughbreds" or of "nearly every living thoroughbred."

This modern dominance comes mainly through a sire line established by Potoooooooo, although King Fergus would also found another successful branch leading to Ribot. Potoooooooo's grandson Waxy would lead the sire list in 1811, and Waxy's grandson Birdcatcher in turn led the sire list in 1852 and 1856. Birdcatcher's grandson Stockwell outdid them both, becoming leading sire seven times. Stockwell's grandson Bend Or founded a line that led four generations later to Phalaris The Phalaris line has several branches, notably through Nearco and Native Dancer. 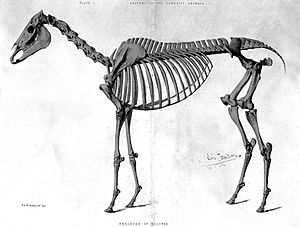 Eclipse died due to an attack of colic on 27 February 1789, at the age of 24. His skeleton is now housed at the Royal Veterinary College, Hertfordshire, in the Learning Resource Centre named after him, although it cannot be said for certain whether all the bones displayed are really from Eclipse. His hooves were made into inkstands, although the fact that there are at least five Eclipse-hoof inkstands casts some doubt on the authenticity of some. Hairs from his tail have also been used for decorations.

A necropsy on Eclipse found that he had an abnormally large heart (weighing 14 pounds (6.4 kg)). This trait has been referred to in the context of thoroughbreds as the "X Factor" Theory. While the theory has yet to be proven, it has gained popularity due to the large hearts seen occasionally in his descendants, including Secretariat and Phar Lap.

All content from Kiddle encyclopedia articles (including the article images and facts) can be freely used under Attribution-ShareAlike license, unless stated otherwise. Cite this article:
Eclipse (horse) Facts for Kids. Kiddle Encyclopedia.