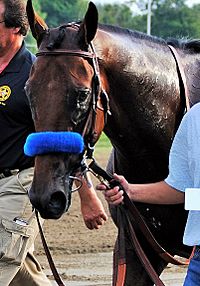 American Pharoah (born 2011; foaled February 2, 2012) is an American Thoroughbred racehorse. He won the American Triple Crown and the Breeders' Cup Classic in 2015. In winning all four races, he became the first horse to win the "Grand Slam" of American horse racing. He won the 2015 Eclipse Award for Horse of the Year and 2015 Champion three-year-old.

He was bred and owned throughout his racing career by Ahmed Zayat of Zayat Stables, trained by Bob Baffert, and ridden in most of his races by Victor Espinoza. He now stands at stud at Ashford Stud in Kentucky.

His sire was Pioneerof the Nile and his dam was Littleprincessemma.

All content from Kiddle encyclopedia articles (including the article images and facts) can be freely used under Attribution-ShareAlike license, unless stated otherwise. Cite this article:
American Pharoah Facts for Kids. Kiddle Encyclopedia.