Woodford County is a county located in the U.S. state of Kentucky. As of the 2010 census, the population was 24,939. Its county seat is Versailles.

Woodford County is part of the Lexington-Fayette, KY Metropolitan Statistical Area. It is located in the heart of the Bluegrass region of Kentucky.

The county was formed from a part of Fayette County, Virginia in 1788. It was named for William Woodford, an American Revolutionary War general from Virginia who died while a prisoner of war in 1780. It was the last of the original nine counties established that formed the Commonwealth of Kentucky in 1792.

Queen Elizabeth II stayed in Woodford County at Lane's End Farm in May 2007. She also attended the Kentucky Derby in Louisville. 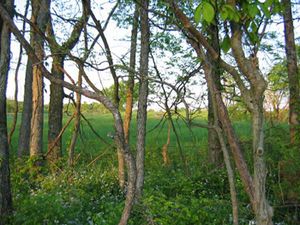 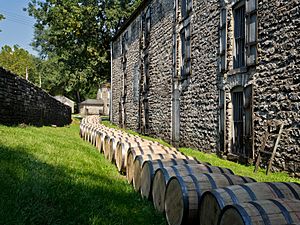 Barrels of bourbon outside the Woodford Reserve distillery

All content from Kiddle encyclopedia articles (including the article images and facts) can be freely used under Attribution-ShareAlike license, unless stated otherwise. Cite this article:
Woodford County, Kentucky Facts for Kids. Kiddle Encyclopedia.