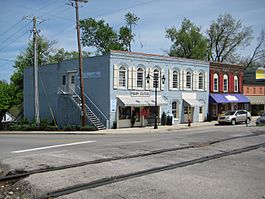 View looking west from intersection of Highway 62 and Main Street

Midway is a home rule-class city in Woodford County, Kentucky, in the United States. Its population was 1,620 at the time of the year 2000 U.S. census. It is part of the Lexington-Fayette Metropolitan Statistical Area. 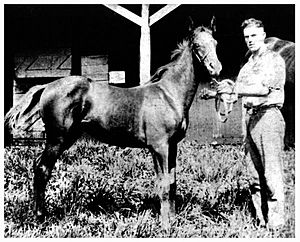 The town is home to a major thoroughbred race horse breeding operation, the Three Chimneys Farm. In 2003, faced with a declining downtown, a major streetscape renovation project began as part of Main Street Kentucky. New period structures and lighting brought new life to the town.

Before its European exploration, the area around Midway was inhabited by the Mound Builders. Two large and several smaller American Indian mounds have been identified on nearby farms.

The present city began as a small settlement known as Stevenson's at the time of its first post office in 1832. On January 31, 1835, the local farmer John Francisco sold his 216.375-acre (87.564 ha) farm to the Lexington and Ohio Railroad for $6,491.25. The railroad then used the land to establish Kentucky's first railroad town, naming it Middleway for its location relative to Lexington and Frankfort, Kentucky. (The town is also equidistant between Versailles and Georgetown.) The major streets of Midway were named in honor of the railroad's original officials. It was renamed Midway in 1837.

There were 623 households out of which 28.6% had children under the age of 18 living with them, 54.1% were married couples living together, 8.8% had a female householder with no husband present, and 34.2% were non-families. 28.9% of all households were made up of individuals and 11.7% had someone living alone who was 65 years of age or older. The average household size was 2.38 and the average family size was 2.96. 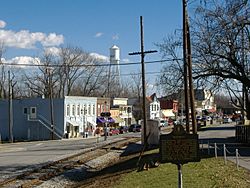 Many homes and businesses in Midway are listed on the National Register of Historic Places.

Zeralda James, mother of Frank and Jesse James, was born in the Black Horse Inn at the intersection of U.S. Route 62 and Old Frankfort Pike, where she lived with her father, who ran the tavern.

Weisenberger Mill has been in the Weisenberger family for seven generations. It is the oldest continuously operating mill in Kentucky and listed on the National Register of Historic Places.

The climate in this area is characterized by hot, humid summers and generally mild to cool winters. According to the Köppen Climate Classification system, Midway has a humid subtropical climate, abbreviated "Cfa" on climate maps.

All content from Kiddle encyclopedia articles (including the article images and facts) can be freely used under Attribution-ShareAlike license, unless stated otherwise. Cite this article:
Midway, Kentucky Facts for Kids. Kiddle Encyclopedia.