Frankfort is the capital city of the Commonwealth of Kentucky and the seat of Franklin County. Based on population, it is the fifth-smallest state capital in the United States. It is a home rule-class city in Kentucky; the population was 25,527 at the 2010 census. Located along the Kentucky River, Frankfort is the principal city of the Frankfort, Kentucky Micropolitan Statistical Area, which includes all of Franklin and Anderson counties.

The town of Frankfort likely received its name from an event that took place in the 1780s. American Indians attacked a group of early European-American pioneers from Bryan Station, who were making salt at a ford in the Kentucky River. Pioneer Stephen Frank was killed, and the settlers thereafter called the crossing "Frank's Ford." This name was later elided to Frankfort.

In 1786, James Wilkinson purchased the 260-acre (1.1 km2) tract of land on the north side of the Kentucky River, which developed as downtown Frankfort. He was an early promoter of Frankfort as the state capital. 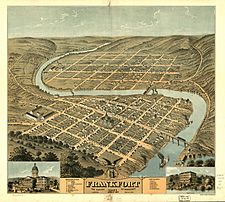 Bird's eye view of the city of Frankfort in 1871. Downtown Frankfort is seen in the foreground, while South Frankfort lies across the river in the background. Fort Hill is in the lower left hand corner.

After Kentucky became the 15th state in early 1792, five commissioners from various counties were appointed on June 20 to choose a location for the capital. They were John Allen and John Edwards (both from Bourbon County), Henry Lee (from Mason), Thomas Kennedy (from Madison), and Robert Todd (from Fayette). A number of communities competed for this honor, but Frankfort won. According to early histories, the offer of Andrew Holmes' log house as capitol for seven years, a number of town lots, £50 worth of locks and hinges, 10 boxes of glass, 1,500 pounds of nails, and $3,000 in gold helped the decision go to Frankfort.

Frankfort had a United States post office by 1794, with Daniel Weisiger as postmaster. (Post Office Department records were destroyed by a fire in 1836. October 1, 1794, is the date of the first quarterly account sent to Washington by Weisiger.)

John Brown, a Virginia lawyer and statesman, built a home now called Liberty Hall in Frankfort in 1796. Before Kentucky's statehood, he represented Virginia in the Continental Congress (1777−78) and the U.S. Congress (1789−91). While in Congress, he introduced the bill granting statehood to Kentucky. After statehood, he was elected by the state legislature as one of the state's U.S. Senators.

In 1796, the Kentucky General Assembly appropriated funds to provide a house to accommodate the governor; it was completed two years later. The Old Governor's Mansion is claimed to be the oldest official executive residence still in use in the United States. In 1829, Gideon Shryock designed the Old Capitol, Kentucky's third, in Greek Revival style. It served Kentucky as its capitol from 1830 to 1910. The separate settlement known as South Frankfort was annexed by the city in January 3, 1850. 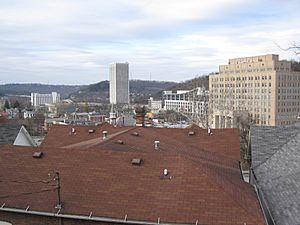 Downtown Frankfort, with the Capital Plaza Office Tower at center.

During the American Civil War, the Union Army built fortifications overlooking Frankfort on what is now called Fort Hill. The Confederate Army also occupied Frankfort for a short time starting from September 3, 1862.

On February 3, 1900 Governor-elect William Goebel was assassinated in Frankfort while walking to the capitol on the way to his inauguration. Former Secretary of State Caleb Powers was later found guilty of a conspiracy to murder Goebel.

Capitol Plaza was established in the 1960s. It comprises the Capitol Plaza Office Tower, the tallest building in the city, the Capitol Plaza Hotel (formerly the Holiday Inn, Frankfort), and the Fountain Place Shoppes. The Capital Plaza Office Tower opened in 1968 and has become a visual landmark for the center of the city. In August 2008, capital officials announced a plan to demolish the Tower and redevelop the area over a period of years. They intend to replace the outdated Tower with a smaller, four- or five-story building in order to create a more pedestrian-oriented scale at the complex, to encourage street activity. 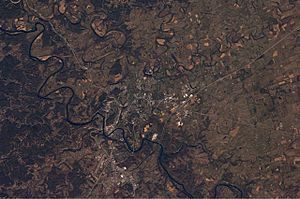 Hilltop view of modern-day Frankfort. The Kentucky River is visible on the left.

The city is bisected by the Kentucky River, which makes an s-turn as it passes through the center of town. The river valley widens at this point, which creates four distinct parts of town. The valley within the city limits contains Downtown and South Frankfort districts, which lie opposite one another on the river. A small neighborhood with its own distinct identity, Bellepoint, is located on the west bank of the river to the north of Benson Creek, opposite the river from the "downtown" district. The suburban areas on either side of the valley are respectively referred to as the "West Side" and "East Side" (or "West Frankfort" and "East Frankfort").

Frankfort has a Humid Subtropical climate with four distinct seasons. Winter is generally cool with some snowfall. Spring and fall are both mild and relatively warm, with ample precipitation and thunderstorm activity. Summers are oppressively hot and humid.

There were 11,140 households out of which 27.9% had children under the age of 18 living with them, 32,6% were married couples living together, 16.7% had a female householder with no husband present, 5.1% had a male householder with no wife present, and 45.7% were non-families. 38.3% of all households were made up of individuals and 12.2% had someone living alone who was 65 years of age or older. The average household size was 2.14 and the average family size was 2.83.

Frankfort is the focal point of a micropolitan statistical area consisting of Frankfort and Franklin County as well as adjacent Lawrenceburg and Anderson County. The city is also classified in a combined statistical area with Lexington and Richmond to the east.

Commonwealth Gardens is a 501(c)3 organization dedicated to the formation of community gardens and school gardens in the Frankfort and Franklin County area. It advocates the consumption of locally grown food because it tastes better, takes less energy to get to the dinner table, and it supports local farmers and merchants.

Walk/Bike Frankfort is dedicated to making the capital of Kentucky the best city in the Commonwealth for pedestrians and cyclists.

Frankfort Climate Action Network works to raise awareness about the threat of climate change and solutions for it.

Josephine Sculpture Park provides community arts education and creative experiences while conserving the beauty of the native, rural landscape. It is free and open every day from dawn until dusk

The Folkbike Re-Cyclery is a non-profit, volunteer organization located at 425 Lewis Street in Frankfort. They restore and repair used bicycles, providing them to people who cannot afford new ones. Many residents donate unused bikes to the group.

East Frankfort Park Disc Golf Course is home to an 18-hole Disc Golf Course, which has been described as short, but technical. The local disc golf club has begun promoting the sport in the area. This is the home of the March Mad Disc and Capitol City Clash tournaments.

Frankfort has one sister city:

All content from Kiddle encyclopedia articles (including the article images and facts) can be freely used under Attribution-ShareAlike license, unless stated otherwise. Cite this article:
Frankfort, Kentucky Facts for Kids. Kiddle Encyclopedia.