Fayette County is a county located in the U.S. Commonwealth of Kentucky. As of the 2010 census, the population was 295,803, making it the second-most populous county in Kentucky. Its territory, population and government are coextensive with the city of Lexington, which also serves as county seat.

Fayette County was one of the original three counties created from the former Kentucky County, Virginia, by the Virginia Act in 1780, along with Jefferson and Lincoln counties. Together they separated from Virginia in 1792 to become the Commonwealth of Kentucky.

Originally, Fayette County included land which makes up 37 present-day counties and portions of 7 others. It was reduced to its present boundaries in 1799. The county is named for the Marquis de LaFayette, who came to America to join the rebelling English colonies in the American Revolutionary War.

On January 1, 1974, Fayette County merged its government with that of its county seat of Lexington, creating a consolidated city-county governed by the Lexington-Fayette Urban County Government. 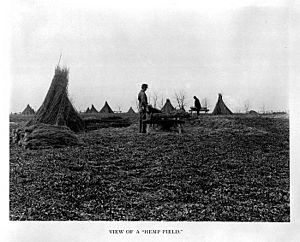 Hemp production was a major crop

All content from Kiddle encyclopedia articles (including the article images and facts) can be freely used under Attribution-ShareAlike license, unless stated otherwise. Cite this article:
Fayette County, Kentucky Facts for Kids. Kiddle Encyclopedia.