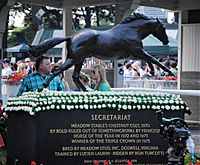 A statue of Secretariat

His record-breaking win in the Belmont Stakes, where he left the field 31 lengths behind him, is widely known as one of the greatest races of all time. He was breaded and owned by Penny Chenery.

During his racing career, he won five Eclipse Awards, including Horse of the Year honors at ages two and three. He was elected to the National Museum of Racing and Hall of Fame in 1974.

Secretariat was euthanized after suffering from laminitis, a hoof disease, at a farm in Paris, Kentucky on October 4, 1989 at the age of 19.

All content from Kiddle encyclopedia articles (including the article images and facts) can be freely used under Attribution-ShareAlike license, unless stated otherwise. Cite this article:
Secretariat (horse) Facts for Kids. Kiddle Encyclopedia.