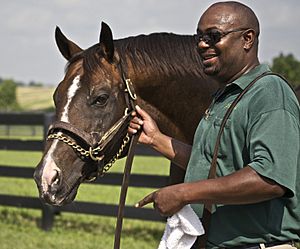 A.P. Indy (March 31, 1989 – February 21, 2020) was an American Thoroughbred racehorse. In 1991, he won the Hollywood Futurity. He had his most successful year in 1992, winning the San Rafael Stakes, Santa Anita Derby, Peter Pan Stakes, Belmont Stakes and Breeders' Cup Classic. He was the 1992 American Horse of the Year and was added to the National Museum of Racing and Hall of Fame in 2000.

All content from Kiddle encyclopedia articles (including the article images and facts) can be freely used under Attribution-ShareAlike license, unless stated otherwise. Cite this article:
A.P. Indy Facts for Kids. Kiddle Encyclopedia.